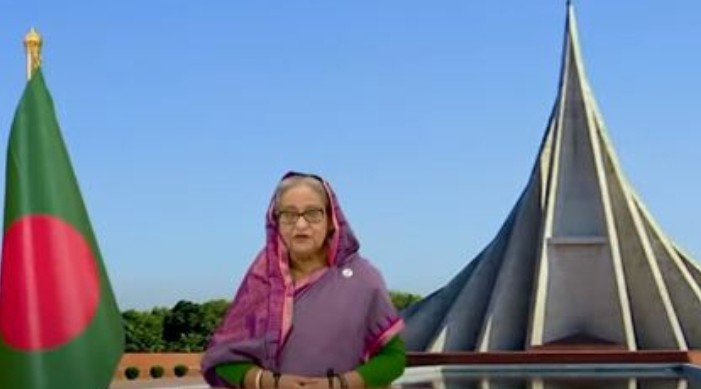 Terming the inauguration of the Maitri Setu on Feni river connecting India and Bangladesh on Tuesday as a historic moment, Bangladesh Prime Minister, Sheikh Hasina announced the dawn of a new era in South Asia through providing connectivity to India.

“This is a historic moment. We are creating a new era in South Asia through providing connectivity to India. We are in a region which has remained conservative in opening up and where inter-regional trade is far below potential,” Hasina said in a recorded video message at the inauguration of the bridge over Feni river in Agartala, Tripura.

Expressing her belief that political boundaries should not be become physical barriers to trade, she explained that the bridge will facilitate Bangladesh trade more easily, not only with India but also with Nepal and Bhutan.

Stating that Bangladesh is ready to maximize its locational advantage, as a connectivity hub between South and Southeast Asia, the Bangladesh Prime Minister pointed out that the cross-border transport system that Bangladesh is developing with India is a step in the in this regard and enable Bangladesh to play an important role in regional trade and commerce.

“Bangladesh’s growth trajectory along with its geographic location makes it an extremely attractive neighbor in South Asia. As one of the leaders in the global textile industry we have carved a distinct path for ourselves and the country has become a favourite destination for foreign investments,” Hasina added.

The Feni Maitri Setu is expected to significantly improve the socio-economic condition of the people of Tripura and surrounding Northeastern states of India, she added hoping that the Maitri Setu will also contribute in improving the livelihoods of those residing on the Bangladesh side of the bridge.

Hasina also recounted that inauguration of the Maitri Setu was taking place at a time when they were celebrating the birth centenary of father of the nation, Banglabandhu Sheikh Mujibur Rahman, the golden jubilee of Bangladesh’s independence and the 50th year of Bangladesh-India diplomatic relations.

Recalling that 50 years ago in 1971, India opened up its borders for Bangladesh people to support their freedom struggle, the Banlgadesh Prime Minister remarked that today, the two were building a prosperous region together.