Indian industry should create best quality goods for the country and the world: PM Modi 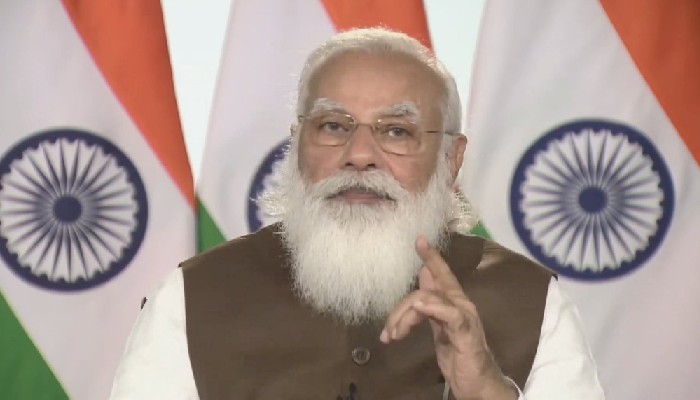 PLI schemes will lead to production worth $ 520 billion in India in the next five years, PM Modi said

Appealing to the industry to join and take advantage of the Production Linked Incentive (PLI) Schemes of the central government, Prime Minister Narendra Modi on Friday stressed on the need to take a big leap, increase the speed and scale to boost manufacturing.

Addressing a webinar on Production Linked Incentives (PLI) scheme organized by Department for Promotion of Industry and International Trade and NITI Aayog through video conference, Prime Minister Modi said the focus of the industry should be on creating best quality goods for the country and the world.

He urged the industry to innovate according to the needs of the fast changing world, increase our participation in R&D, upgrade the manpower skills and use of new technology.

The Prime Minister said that over the past 6-7 years, several successful efforts had been made to encourage Make in India at different levels.

Speaking on the steps taken to boost trade and industry in this year’s Union Budget, the Prime Minister informed that a provision of about 2 lakh crore rupees has been made for schemes related to the PLI scheme. He added that, an average of 5 % of production is given as incentive.

“This means that PLI schemes will lead to production worth $ 520 billion in India in the next five years. It is also estimated that sectors for which the PLI scheme has been created will witness doubling of the workforce,” the Prime Minister noted.

He pointed out that, previously, industrial incentives used to be open ended input based subsidies, now they have been made targeted and performance based through a competitive process.

The Prime Minister said 13 sectors have been brought under Production Linked Incentives for the first time.

Highlighting that the PLI benefits the entire ecosystem associated with the sector, he said with PLI in auto and pharma, there will be very less foreign dependence related to auto parts, medical equipment and raw materials of medicines.

Adding that the energy sector will be modernized in the country with the help of Advanced Cell Batteries, Solar PV modules and Specialty Steel, the Prime Minister noted that PLI for the textile and food processing sector will benefit the entire agriculture sector.

The Prime MInister said that PLI related announcements are being implemented with speed. He said recently approved PLI schemes in IT hardware and Telecom equipment manufacturing will lead to tremendous increase in production and domestic value addition.

IT hardware is estimated to achieve 3 trillion rupees worth production in 4 years and domestic value addition is expected to rise from current 5-10 percent to 20-25 percent in 5 years. Similarly telecom equipment manufacturing will witness an increase of about 2.5 lakh crore rupees in 5 years. We should be in a position to export worth Rs 2 lakh crore from this, said the Prime Minister.

In the Pharma sector, the Prime Minister expected more than 15 thousand crore rupees investment in next 5-6 years under PLI, leading to Rs 3 lakh crore in pharma sales and export increase worth Rs 2 lakh crore.

The Prime Minister asserted that India had become a big brand all over the world and the country’s credibility and identity is constantly reaching new heights.

He pointed out that “trust had increased in our medicines, our medical professionals and our medical equipment across the world”.

He urged the pharma sector to work on chalking out long-term strategy to take advantage of this.

He said the PLI scheme was launched last year to incentivize manufacturing of mobile phones and electronic components in India. Even during Pandemic, the sector manufactured goods worth Rs 35000 crore last year, saw a fresh investment of about Rs 1300 crore and created thousands of new jobs in this sector.

The Prime Minister argued that the PLI Scheme would make a major impact to the country's MSMEs ecosystem by creating the anchor units in every sector that will need a new supplier base across the entire value chain.