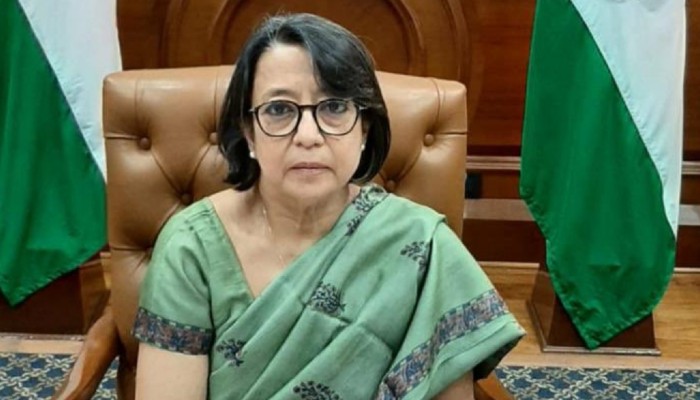 Secretary (East) Riva Ganguly Das addressing the inaugural session of the webinar on connectivity in the Bay of Bengal Region.

“Connectivity and economic growth are directly linked in today’s globalised world. Growth in trade, industrial development and technological advancement go hand-in-hand with the ease of connectivity,” the Secretary (East) said at a virtual conference.

She emphasized that the North-eastern Region binds us with some of the countries to the East and, more importantly, links the Neighbourhood First and Act East Policy of India, two vital pillars of Indian foreign policy.

Noting that India has taken vigil in enhancing regional connectivity under Bay of Bengal Initiative for Multi-Sectoral Technical and Economic Cooperation (BIMSTEC) Framework, she recounted that India was the lead country in 4 out of 14 sectors in BIMSTEC, including transport and communication sectors.

She expressed satisfaction that the BIMSTEC Master Plan for transport connectivity had been finalized at a working group meeting in December 2020.

The master plan developed in collaboration with ADB has been envisioned to serve as a strategic document to promote synergy under various connectivity frameworks such as the ASEAN Master Plan on Connectivity 2020-25, she added.

According to the MEA Secretary (East), the master plan identifies a total of 264 projects involving an estimated cost of USD 126 billion and USD 55.2 billion dollars including and excluding the ongoing projects over the 10 year horizon from 2018 to 2028.

She further informed that 70 of the 157 flagship projects with an estimated cost of USD 22.9 billion are already under different stages of implementation.

Simultaneously, BIMSTEC member countries are working on establishing legal frameworks to fully utilize the potential of connectivity infrastructure, these include the BIMSTEC coastal shipping agreement and BIMSTEC Motor Vehicles Agreement to facilitate seamless transport of goods across our borders, Ganguly Das stated.

The 1st BIMSTEC ports conclave was hosted by India at Visakhapatnam to improve connectivity between the ports of the region, she said. In tandem with the resolution in the last BIMSTEC summit to enhance capacity building in diverse areas, initiatives that already been implemented include the BIMSTEC Military Exercises, 2nd BIMSTEC Disaster Management Exercise, BIMSTEC Coastal Security Workshop.

Announcing that there is a proposal to further exchange the India’s National Knowledge Network with BIMSTEC countries, she stated that these initiatives directly or indirectly contribute to enhancing connectivity in the region.

Highlighting the involvement of North-east in some of these initiatives the MEA Secretary (East) said that there is a provision for training of 24 candidates from BIMSTEC countries in a course on space and remote sensing at the Northeast Space Application Centre in Shillong. This was done in January last year.

The two day-long conference hosted by Observer Research Foundation (ORF) in Kolkata hopes to gather some actionable points pertaining to the Bay of Bengal region and North-eastern Region including, trade and development and importance of the Bay for wider Indo-Pacific.