An amphibious landing of infantry troops in progress.

The integral combat platforms and forces of the Andaman and Nicobar Command (ANC) demonstrated multi-dimensional operational capabilities of the Command, including an amphibious landing, during a Joint Services Operational Demonstration today.

Fourteen ships of the Indian Navy, two Fast Attack Crafts of Coast Guard, aircraft of the Indian Air Force and over 300 troops of the Indian Army with six BMPs showcased integrated application of combat power of India's only Tri-Service Command, the Ministry of Defense said in a statement.

President Ram Nath Kovind witnessed the demonstration, which highlighted the synergy, cooperation and interoperability between the Services towards achieving desired outcomes.

President Kovind was earlier briefed by Commander-in-Chief Andaman and Nicobar Command (CINCAN) Lieutenant General Manoj Pande on the operational capabilities and state of readiness of the Command. 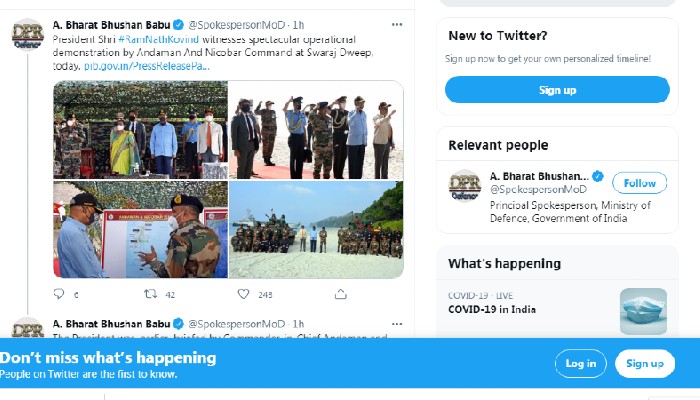 The Operational Demonstration showcased various facets of joint operations and included Combat Free Fall (CFF) and helocasting by the MARCOS, Special Heliborne Operations (SHBO) by Ghatak Platoon and amphibious assault by infantry troops, who landed on the beach with six BMPs and over 300 combatants.

The amphibious landing of Infantry troops on the beach was executed by Landing Ship Tank (Medium) and Landing Craft Utility.

The Operational Demonstration culminated with the fly past of Dornier aircraft, MI-17 V5 and Chetak helicopters flying in close formation depicting the Tri-Service synergy and Combat potential of the Andaman & Nicobar Command, the ministry's statement said.