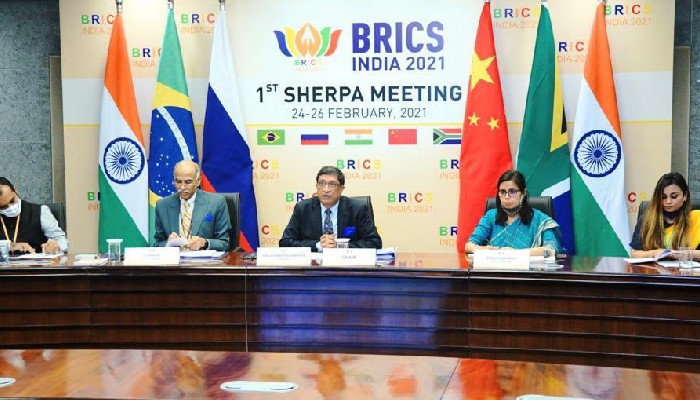 Reform of the multilateral system, counter terrorism, digital and technological solutions for attaining SDGs and people to people exchanges will be priorities of India during its yearly presidency of BRICS, the Ministry of External Affairs said in a statement on Friday.

The theme will be “BRICS@15: Intra BRICS Cooperation for Continuity, Consolidation and Consensus.”

The calendar of events for BRICS 2021 was also presented followed by discussion and feedback sessions. A series of briefings and presentations were made by various Indian government Ministries on the country’s priorities across various thematic areas during its Chairmanship.

The Vice President of the BRICS New Development Bank, Anil Kishora, briefed BRICS Sherpas on the bank’s priorities for the year, including the opening of the bank’s regional offices in Russia and India, and on NDB membership expansion.

Cultural and People-to-people engagement was a focus area during the three day meeting with the Chairs of the BRICS Business Council, BRICS Women Business Alliance, BRICS Academic Forum, BRICS Civil Forum and BRICS Think Tank Council presenting their agenda and planned activities for the year.

BRICS partners appreciated the theme and priorities selected by India for its Chairmanship year for being timely and relevant, and expressed support for the new initiatives proposed by India. BRICS Sherpas agreed to meet again in two months time to review the progress made on the discussions, and the programme of upcoming Foreign and other Ministerial meetings.