External Affairs Minister S Jaishankar on Thursday held a meeting with his Uzbekistan counterpart Abdulaziz Kamilov and reviewed the bilateral cooperation between the two countries.

According to the Ministry of External Affairs, the Ministers positively assessed the progress on the outcomes of the India-Uzbekistan Virtual Summit between Prime Minister Narendra Modi and President of Uzbekistan Shavkat Mirziyoyev held on December 11, 2020.

Both countries have been actively cooperating in the regional and multilateral formats including the United Nations, Shanghai Cooperation Organization and the India-Central Asia Dialogue.

During the meeting, Foreign Minister Kamilov extended an invitation for participation in an international conference on regional connectivity being organized by Uzbekistan in Tashkent on July 15-16, 2021.

Both Ministers also discussed the evolving situation in Afghanistan and noted the importance of a stable and peaceful Afghanistan for regional peace, stability and security. 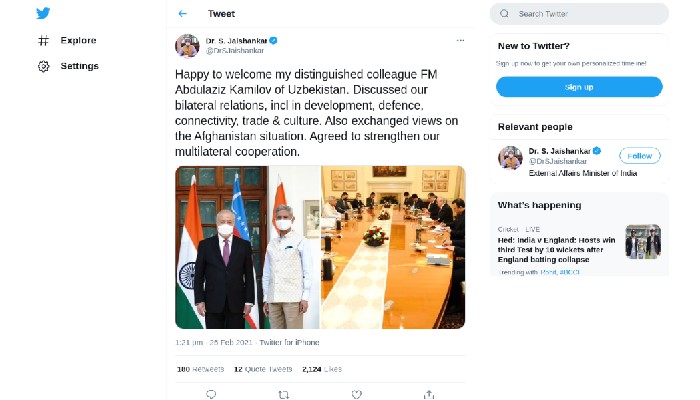 Uzbekistan Foreign Minister Kamilov was on a two-day visit to New Delhi from February 24 to 25.