Feels like homecoming: EAM Jaishankar to Indian diaspora in Mauritius 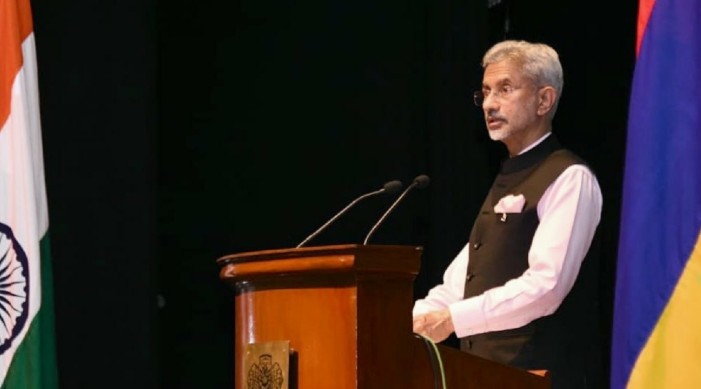 The Indian community is a shining example of the country's values such as peace, pluralism, shared progress and universal brotherhood, External Affairs Minister S Jaishankar said on Tuesday, addressing the Indian diaspora in Mauritius.

Jaishankar, who arrived here in India's strategically key maritime neighbour in the Indian Ocean region on Sunday night from the Maldives on the second leg of his two-nation tour, met the members of the Indian community during an event and thanked them for keeping the faith and fervour alive in Mauritius.

“On behalf of the people and the government of India, therefore, I would like to thank you, not just for keeping your ancestral memories alive in this beautiful country, but also making it a shining example of everything that India stands for – peace, pluralism, shared progress, and universal brotherhood. In other words, our belief in "Vasudhaiva Kutumbakam”, that "the world is one family”,” Jaishankar said.

“Feels like homecoming. Thank the vibrant Indian community for keeping our faith & fervour alive in Mauritius. A shining example of all that India stands for – peace, pluralism, shared progress & universal brotherhood - values more relevant than ever today,” he said on Twitter. 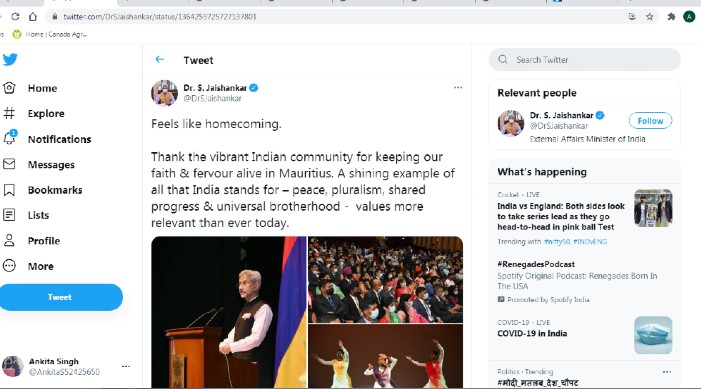 Indian-origin people constitute nearly 70 per cent of the population of Mauritius. Their ancestors were sent there as indentured labourers during British rule.

Addressing the gathering, Jaishankar noted that every time he visits Mauritius, he feels proud that the Indian diaspora and Mauritians take in India’s growth and rise.

“In this exciting journey of India’s rise, our Pravasi Bhartiyas play an important role. According to a latest report, more than 200 Indian-origin persons occupy top leadership positions in at least 15 countries of the world. Though I must say Mauritius sets an example. Your invaluable contribution to our nation-building; your role as a ‘living bridge’ between India and your countries of domicile and the laudable reputations you have earned by the dint of your hard work, competence and assimilation; have all helped fly the Indian flag higher in different parts of the world,” he said.

“I thank you today on behalf of all Indians, for your outstanding contribution to Mother India. I invite you and all the socio-cultural organisations and businesses present here, and those to whom you would communicate this message, to reach out to us with any ideas, proposals, suggestions, feedback that you may have, to help us advance further on this shared path,” he added.

India on Monday signed a landmark Comprehensive Economic Cooperation and Partnership Agreement (CECPA) with Mauritius, the first of its kind with an African nation, making the strategically-located country a launch-pad for business expansion into the huge African continent.

“The fact that this is the first trade agreement that India has signed with any African country, shows how special Mauritius is for us. We are excited about the tremendous opportunities CECPA opens up for boosting two-way trade in goods and services as well as investments, which is urgently needed in our post-Covid economies. Earlier today, as I was joined by the commerce secretary and my other colleagues, I met the business leaders of Mauritius and discussed with them how CECPA could contribute to increasing economic activity in Mauritius and making it a "hub for Africa”,” Jaishankar said.