Over 63% of defence budget meant for domestic procurement: Rajnath Singh 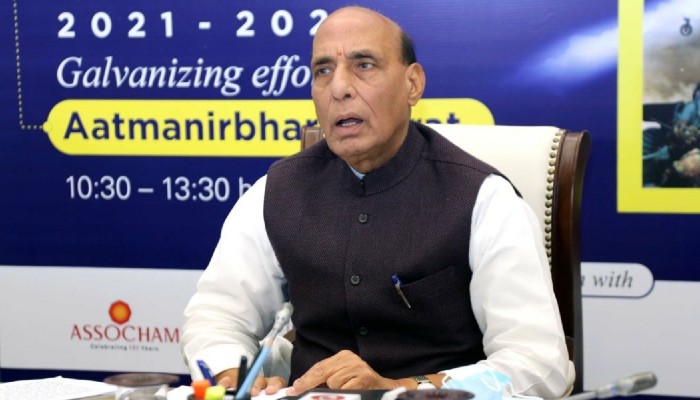 This translates to an allocation of over Rs 70,000 crore for domestic procurement in 2021-22

Defence Minister Rajnath Singh has said the government has set aside 63 per cent of the defence budget outlay for domestic procurement only in order to boost 'Make in India' and Atma Nirbhar Bharat.

Speaking during a webinar on the defence budget organised by the Society of Indian Defence Manufacturers (SIDM) on Monday, Singh said, "My Ministry has planned to invest about 63% of the outlay for 2021-22 on domestic procurement, i.e. about Rs 70,221 crore for domestic defence procurement during 2021-22".

This increase, Singh explained, will have a positive impact on enhanced domestic procurement, having a multiplier effect on our industries, including MSMEs and start-ups.

"It would also increase employment in the defence sector,” he said.

“A major factor for speeding up the procurement process relates to faster decision making and delegation of financial powers. Keeping this in mind, recently, our Government has approved enhanced delegation of Financial Powers under Capital Procurement for items of Capital nature such as overhauls, refits, upgrades etc.! This will enhance the utility of existing assets and facilitate faster processing and implementation of projects,” he added.

He said the Ministry of Defence has notified a 'Negative list' of 101 items for which there would be an embargo on import beyond the timeline indicated against them.

"This is a big step towards achieving self-reliance in defence. This would offer a great opportunity to the Indian defence industry to manufacture these items using their own design and development capabilities to meet the requirements of the Armed Forces in the coming years," Singh said.

Talking about the government's initiatives to achieve self-reliance, Singh said the steps taken by the Centre have resulted in staggering 700 per cent growth in defence exports in the last six years.

"India entered in the list of top 25 exporters in the world as per data published by SIPRI in 2020. We have also notified the Open General Export License (OGEL) - a one-time export licence, which permits the industry to export specified items to specified destinations, enumerated in the OGEL," he added.

Apart from these, the Minister said that Government of India has also established a Technology Development Fund (TDF) Scheme under the ‘Make in India’ initiative to create an eco-system for enhancing cutting edge technology capability by inculcating Research and Development culture in Industry for building indigenous state-of-art systems for defence applications and import substitution.

“Our flagship program of Innovation for Defence Excellence (iDEX) is also making headways into greater innovation.To give a major boost to innovative defence technology and support Start-ups base in the country, Ministry of Defence has planned to channelize about Rs. 1000 Crore during 2021-22 for procurement from iDEXStart-ups,” he said.

To widen the investment base, the Centre has also enhanced FDI in the defence sector up to 74 per cent under automatic route and 100 per cent under the government route, he said.

"The opening up of the defence sector for private sector participation is helping foreign OEMs enter into strategic partnerships with Indian companies and leverage opportunities in the domestic market as well as global markets," he said, adding the FDI in India in the defence sector has jumped by over 200 per cent as Rs 2,871 crore worth FDI has been invested in the sector in the last six years.