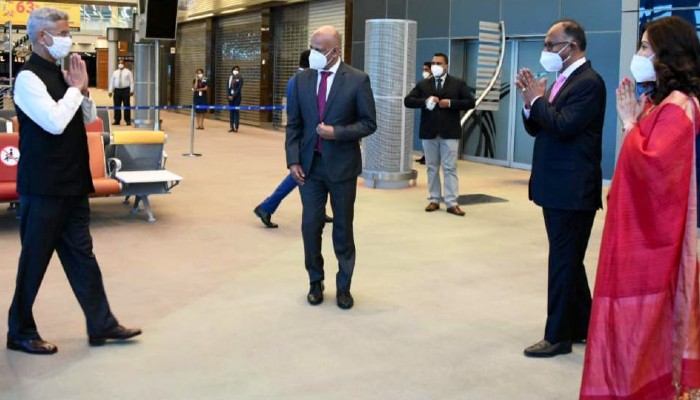 Jaishankar will review all aspects of bilateral relations, ongoing implementation of various infrastructure projects being carried out by India

After concluding his two-day visit to Maldives, External Affairs Minister S Jaishankar in the second leg of the two-nation trip, landed in Port Louis on Sunday to a warm welcome by Mauritian Foreign Minister Alan Ganoo.

During his visit, EAM Jaishankar will call on President Prithvirajsing Roopun and Prime Minister Pravind Jugnauth.


During his visit, Jaishankar will review all aspects of bilateral relations, ongoing implementation of various infrastructure projects being carried out by India in Mauritius, and hold discussions on bilateral, regional, and global issues of mutual interest including India's assistance to Mauritius.

The visit is significant since India is the largest development cooperation partner of Mauritius with a focus on people-oriented projects.

India is also a partner of preference for Mauritius in meeting its defense requirements and a regular supplier of defense equipment, vessels, and aircraft to the country.

It may be recalled that as part of its focus on people-oriented projects to cement close ties between the two countries, India had in 2016 announced a special economic package of USD 353 million as grant assistance for five key infra-projects.

These included the Metro Express project, Social Housing project, Supreme Court Building, ENT Hospital, and the E-Tablet project. A GoI supported Line of Credit of USD 500 mn has also been extended to Mauritius in 2017 for various infrastructure projects.

Earlier, in October 2019, the two Prime Ministers had jointly inaugurated Phase 1 of the landmark Metro Express project and a new ENT hospital in Mauritius.

The Metro Express Project is the largest infrastructure project being executed by India in Mauritius.

According to available data, the metro ridership has already crossed the 3.1-million mark in the last year, a significant milestone for a country whose population is only 1.3 million.

At the same time, the ENT hospital has become an important asset for Mauritius as it is the main healthcare facility handling COVID-19 infection cases in Mauritius.

India has been steadfast in its support to Mauritius during the Covid pandemic and the country was amongst the largest beneficiaries of India’s COVID-related assistance.

Under the Mission SAGAR, India supplied 13 tonnes of essential medicines, 5 lakh HCQ tablets, and 10 tonnes of Ayurvedic medicines to Mauritius in April-May 2020.

It had also sent a special Medical Assistance Team to supplement the local government’s efforts against the pandemic.

As part of India’s VaccineMaitri initiative, Mauritius received 1,00,000 doses of the Covishield vaccine from India on January 22 this year.

India has also been prompt in assisting Mauritius in other spheres whenever needed.

In August 2020, India had responded to the request of the Government of Mauritius for assistance in dealing with the environmental crisis due to an oil spill on its south-east coast.

India provided over 30 tonnes of technical equipment and material on board an IAF aircraft to Mauritius to supplement its ongoing oil spill containment and salvage operations following the grounding of bulk carrier MV Wakashio.

The last visit by an Indian External Affairs Minister to Mauritius was in August 2018 when Sushma Swaraj attended the 11th World Hindi Conference.

Prime Minister of Mauritius Pravind Jagnauth last visited India on a private visit along with his spouse in Dec 2019, just after his victory in the general elections