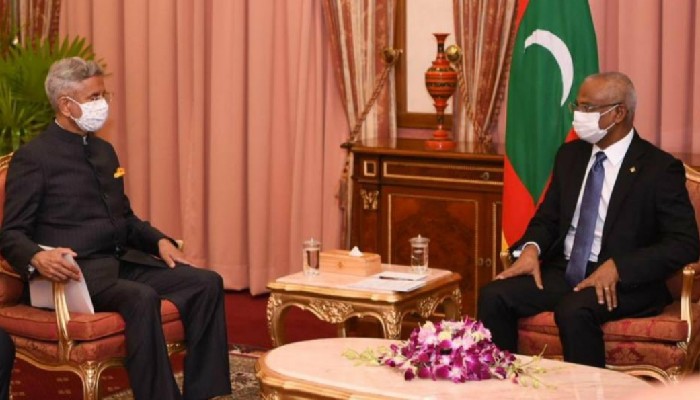 President of Maldives Ibrahim Solih thanked PM Narendra Modi and the people of India for an additional 100,000 doses of COVID-19 vaccine

Reaffirming their commitment to further strengthening the relationship and exploring new areas of cooperation, India and Maldives have signed multiple agreements for infrastructure development projects financed through India’s Lines of Credit (LoC) in the archipelagic nation.

The agreements were signed during External Affairs Minister S Jaishankar's two-day visit to Maldives on February 20-21 on an invitation from Minister of Foreign Affairs of Maldives Abdulla Shahid.

President Solih thanked Prime Minister Narendra Modi and the people of India for the assistance announced during the visit.

"Always a pleasure to meet my friend and Indian EAM @DrSJaishankar. In our discussions today, I conveyed our thanks to PM @narendramodi and the people of India for the generous assistance announced during the EAM’s visit including an additional 100,000 doses of Covishied vaccine".

Always a pleasure to meet my friend and Indian EAM @DrSJaishankar. In our discussions today, I conveyed our thanks to PM @narendramodi and the people of India for the generous assistance announced during the EAM’s visit including an additional 100,000 doses of Covishied vaccine. pic.twitter.com/SVc5zr860N

"Thank President @ibusolih for receiving me. Conveyed PM’s greetings. Reiterated our fullest commitment as comprehensive development partners- during COVID and beyond," Jaishankar said on Twitter after the meeting.

Thank President @ibusolih for receiving me. Conveyed PM’s greetings. Reiterated our fullest commitment as comprehensive development partners- during COVID and beyond. pic.twitter.com/sneMKDeyEG

It further stated that the contract for construction of roads and drainage systems in Addu City was awarded during the visit. This construction project is the first of the eight major infrastructure projects being implemented jointly by the Maldives and India.

The tender for the Greater Male Connectivity- Male to Thilafushi Link Project (GMCP) was also published this week, within six months of the announcement of India’s financial support to it.

Maldivan Foreign Minister Shahid noted the key role that India continues to play in the socio-economic development of the Maldives. He recounted that the High Impact Community Development Projects and Small Grants Projects are very beneficial for the local communities, the joint press statement informed.

India and Maldives inked a MoU for the establishment of a Geydhoshu Mas Plant in Noonu Atoll Kendhikulhudhoo, the release further said. This is the twelfth project to be financed under the High Impact Community Development Projects scheme, it further added.

According to the statement, Foreign Minister Shahid requested for a second tranche of financing under the scheme.

During the visit, the two Ministers jointly inaugurated two projects financed with Indian grant assistance in Hulhumalé – the development of pathways, lighting and seating, as well as soft scaping of two sectors of the Hulhumalé Central Park, and the renovation of the Hulhumalé Westside Jetty.

The two countries also signed an amendatory agreement for the $40 million Line of Credit signed in 2011.

Under this amendatory agreement, the unutilized amount of $25.64 million under this Line of Credit, will be directed towards roads development projects in the Maldives.

A Letter of Intent between Fahi Dhiriulhun Corporation and EXIM Bank was signed during this visit towards extending a credit facility under EXIM Bank’s Buyer’s Credit scheme to support the design and construction of 2000 social housing units in Hulhumalé.

According to the joint press statement, other MoUs signed between the two countries during the External Affairs Minister’s visit include cooperation between Public Service Media and Prasar Bharati, and between the Ministry of National Planning, Housing and Infrastructure, Maldives, and the Ministry of Housing and Urban Affairs, India on Sustainable Urban Development.

These MoUs would serve to further strengthen the already strong bilateral cooperation, by expanding into new fields of cooperation.