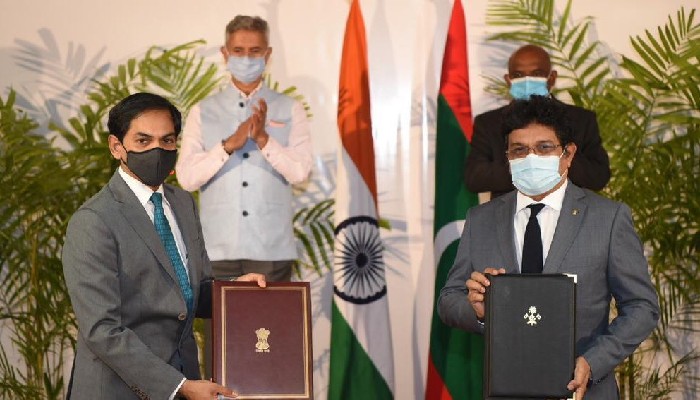 India-Maldives relationship has strengthened and transformed over years

Describing India-Maldives partnership as “extraordinarily deep,” External Affairs Minister S Jaishankar, during joint press conference with his Maldivian counterpart Abdulla Shahid on Saturday said relationship between the two countries is “today poised for a quantum jump, scaling new heights and touching the lives of the people like never before.”

He said the ‘India First’ policy of President Solih is reciprocated in full measure by Prime Minister Modi’s ‘Neighbourhood First’ policy in which Maldives enjoys a central position.

“Ours is an extraordinarily deep partnership in which we have both supported each other in the best traditions of friendship and neighbourliness,” EAM Jaishankar said.

“The special place we have for each other in our foreign policy at one level, and in our hearts at another, makes our bilateral relationship truly a moral for our neighbourly relations,” he said.

“It is therefore quite natural that the first and largest recipient of India’s Covid support – be it medicines, food, medical response teams or financial package – was Maldives. It is equally no surprise that Maldives is the first country where India-made COVID vaccines landed, and this was just within 96 hours of our own vaccine roll out,” Jaishankar maintained.

Congratulating Maldives for its efficient vaccination drive, the EAM said: “I must congratulate you, Minister, on your efficient vaccination drive making, I believe, Maldives 3rd best in the world in terms of daily doses administered per 100 population. To further assist you in this drive, I have today carried with me another consignment of 100,000 doses of COVID vaccine as India’s gift to the government and people of the Maldives.”

“We had very useful discussions before this press Conference and the MoUs and Agreements which have been signed today are emblematic of our strong development partnership which is multi-faceted and designed to meet the specific development needs of the people of Maldives,” he said.

“From fish processing to defence, from building roads to constructing housing, from public broadcasting to airport expansion and connectivity, the range of areas we are working on will further translate into reality the common vision of our leaders Prime Minister Modi and President Solih,” the EAM added.

“We jointly reviewed the ongoing Indian infrastructure projects under two Lines of Credit worth $ 1.2 billion. The Contract for one of the most important infrastructure projects – for the construction of Roads in Addu has been finalised and, I believe, will be signed tomorrow. This will bring tangible benefits to the people of Addu and transform lives and livelihoods in the South of Maldives,” he said.

“India is indeed honoured to partner with Maldives in the prestigious Greater Malé Connectivity Project – the largest connectivity project ever in the Maldives. I am happy to note that GMCP is in the tendering stage. We expect it to become an economic lifeline of the new Maldives; connecting Malé with Villingili, the new commercial port at Gulhifalhu and industrial zone at Thilafushi,” Jaishankar said.

Other projects like Water and Sanitation for 34 islands across the archipelago, Hanimadhoo Airport expansion, development of Gulifalhu Port, Cricket Stadium at Hulhumalé are all progressing well. Needless to say, these projects will conform to the hallmarks of Indian development cooperation which are transparency, full participation and ownership of the host country and competitive pricing.

“I am confident that these projects will change the economic landscape of the Maldives and bring greater prosperity to its people,” he said.

“During the last one year, we have not only worked in close coordination with the Government of Maldives for Covid relief but also looked beyond at post-Covid economic recovery, a key priority of the Maldivian Government,” the EAM maintained.

“The Air Travel Bubble, which the Minister referred to, which was India’s first in the region, has contributed significantly to tourism revival in the Maldives with India topping tourist arrival charts in 2020. Today this has expanded to over 40 weekly flights between Malé and 7 Indian cities connecting our people like never before and also making a real difference to the Maldivian economy,” he said.

While talking about the launch of cargo ferry service from Tuticorin and Kochi to Malé and Kulhudhuffushi, he said this has “brought new connectivity between our countries and economic dynamism in Northern Maldives. It has also served as an inspiration for the Addu-Tuticorin ferry service. Even while our borders were closed due to the pandemic, we continued to make special openings for our Maldivian friends for humanitarian cases like medical emergencies and education.”

“In today's globalized and interconnected world, multilateral engagement is also very important. We have always been supportive of the larger participation of Maldives in various multilateral fora” the EAM said.

“By joining the Indian Ocean Regional Association, re-joining the Commonwealth and playing a greater role in the United Nations, Maldives has demonstrated its value in the comity of nations,” Jaishankar observed.

In this context, “I reiterate today India’s strong support to the candidature of Foreign Minister Abdulla Shahid for President of the 76th session of the UN General Assembly next year. Foreign Minister Shahid, with his vast diplomatic experience and his leadership qualities is, in our view, the best equipped to preside over the General Assembly of 193 nations of the world. We will work together to make this a reality. We would really like to work with you during our membership of the United Nations Security Council for 2021-22,” the EAM affirmed.