Envoys visit to J&K aimed at enabling them to get experience of ground situation: MEA 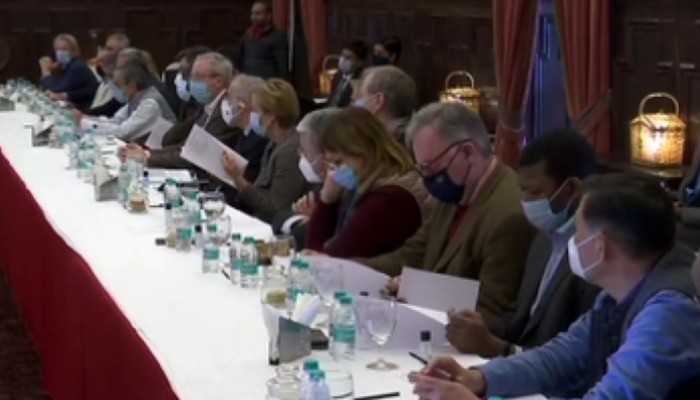 Foreign envoys during their visit to Jammu and Kashmir.

To see that Jammu and Kashmir is on the path of peace and inclusive development, 24 heads of missions undertook two-day visit to the Union Territory

In order to get first-hand experience of the ground situation in Jammu and Kashmir, a group of 24 heads of missions based in New Delhi visited the Union Territory on February 17-18.

Prior to the outbreak of the COVID-19 pandemic, two groups of resident Heads of Missions had visited Jammu and Kashmir in January and February 2020.

“The idea behind facilitating these visits was to enable foreign heads of missions to get a better sense of the ground situation and the prevailing normalcy in the Union Territory. Subsequently, there has been an enhanced interest in the ongoing political and democratic process, including strengthening of grass-root democracy in J&K,” Ministry of External Affairs’ Spokesperson Anurag Srivastava said responding to media queries on the visit of foreign heads of missions to Jammu and Kashmir.

He said the present visit by the third group of foreign heads of missions, is in this context, to allow foreign envoys to witness, first-hand, J&K’s march on the path of inclusive development and the dynamism in the grass-root democratic institutions in J&K following the successful conduct of the recent local-level elections.

As regards their detailed programme of the visit, the group of envoys visited Srinagar, Budgam and Jammu during the two days.

They visited Magam in Budgam District of Central Kashmir and participated in ‘Block Diwas’ a grass-root level democratic outreach initiative organized regularly by the local administration in J&K, as part of efforts to promote good governance.

The interaction at the Block Diwas event provided the envoys an opportunity to hear directly from the general public and local level people’s representatives on the functioning of empowered grass root democratic institutions, devolution of power and developmental activities.

“In Srinagar, they had a very fruitful interaction with the elected representatives of the Urban Local Bodies, District Development Councils (DDC) and the Block Development Councils (BDC) from all the districts of Kashmir Division representing various regional and national political parties,” the MEA Spokesperson maintained.

The group also visited the famous Hazratbal Shrine, the holiest and most revered mosque in Srinagar frequented by scores of locals for mass prayers.

Both in Srinagar and Jammu, the group interacted with representatives from civil society, including youth from different ethnic, religious and socio-economic communities, local business and political leaders, civil administration and representatives of mainstream media.

The group of envoys also visited the Chinar Corps headquarter in Srinagar where they received a briefing on the prevailing security situation, including external threats, in J&K and on the initiatives of J&K police relating to community policing and engagement.

Thereafter, they travelled to Jammu and met the Chief Justice of the UT of Jammu and Kashmir and Ladakh, the Lt Governor of J&K, other senior officials and members of the civil society.

During the interaction, the Chief Justice highlighted the role played by the judiciary in enhancing access to the legal system for the common people in J&K including to preserve rule of law and protect rights of the people.

The Lt Governor shared the vision of peace, progress and prosperity for J&K, apart from highlighting key people-centric development projects that are underway and also planned in J&K.

“The visiting envoys were also made aware of the New Industrial Policy of J&K and were invited to take part in the economic growth and development of the Union Territory,” the MEA Spokesperson said.