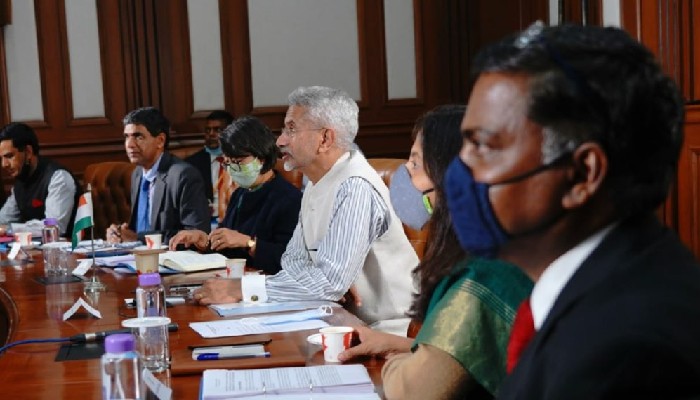 The meeting was a follow up to the 7th Round of Foreign Office Consultations held between the two countries, in New Delhi in June 2019. The two Ministers discussed the whole gamut of bilateral relations as well as regional and global issues of mutual interest.

As per the Ministry of External Affairs, the two Ministers, during the review meeting, expressed satisfaction at the current state of bilateral relationship and agreed to boost bilateral cooperation and trade and investments in areas identified by the two sides. These include agriculture, food processing, ICT, ITeS, e-governance, S&T, education, automotives, energy, healthcare and pharmaceuticals, construction, textiles and garments, jewellery, leather goods and tourism.

Bilateral cooperation on defence also came up for discussion. The two Ministers also agreed to push for early conclusion of the various MoUs and Agreements under discussion for strengthening bilateral mechanisms and to take measures to boost bilateral trade.

Discussions were also held on utilization of India’s offer of assistance to Brunei’s capacity building programme and India’s continued commitment to Brunei in this regard.

Both Ministers reaffirmed to enhance bilateral cooperation in all areas of engagement, support each other’s national development, and strengthen cooperation against common global challenges.

Earlier, the EAM complimented Brunei on effectively containing the Corona-19 pandemic in the country.

Jaishankar also congratulated Brunei on assumption of ASEAN Chairmanship for 2021 and assured Brunei of India’s full support for successful chairmanship of ASEAN.

The EAM thanked the Bruneian Government for its support to India’s space programme by facilitating the relocation of ISRO’s existing Telemetry, Tracking and Command (TTC) Station to a new site; India’s candidatures to various international bodies; and on the subject of international terrorism.

He also thanked the Government of Brunei for its assistance in facilitating repatriation of Indians stranded in Brunei following flight disruptions in the wake of Covid-19 pandemic.

On the other hand, the Brunei Foreign Minister thanked the Government of India for supporting the repatriation of Brunei nationals as well as for excellent human resource development cooperation.