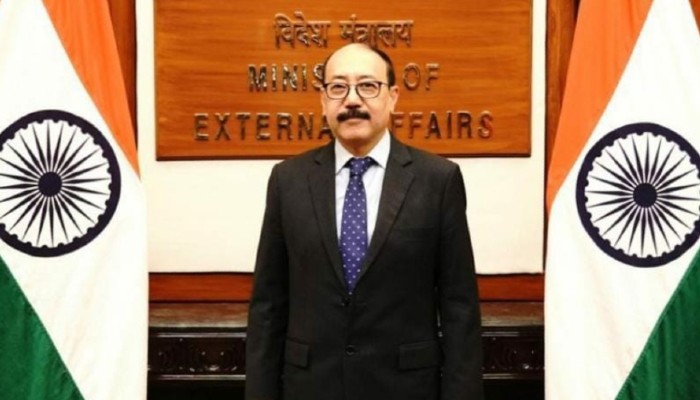 Foreign Secretary Harsh Vardhan Shringla has arrived in Russia on a two-day visit in what is his first foreign tour this year.

He will be meeting the Deputy Foreign Minister of Russia Igor Morgulov and will have a “fruitful and productive” discussion on India-Russia ties, he said after his arrival.

“I am very happy to be here in the beautiful city of Moscow. This is the first visit I have made outside India in this new year and traveling in this Covid times gives an indication to the importance we attach to Russia. I am looking forward to meeting my counterpart Deputy Foreign Minister Igor Morgulov tomorrow. I am sure it will be a very fruitful and productive discussion,” he said.

In a video message shared by the Indian embassy in Russia, Shringla said he will also be meeting academics and media people to get a little bit of the taste of the Russian culture.

“On the whole, we are on the way to see how we can add momentum to an already vibrant relationship—a very strong India and Russia special and strategic partnership,” he added.

FS Shringla is on a two-day visit to Russia during which both sides will deliberate on bilateral as well as topical issues of regional and global importance.

The Ministry of External Affairs said this year’s first visit abroad by the foreign secretary to Moscow signifies the importance India attaches to its close and friendly relations with Russia.

It said the two sides will review the entire gamut of bilateral relations, including the forthcoming high level exchanges, during Shringla’s visit.

“Foreign Secretary Harsh Vardhan Shringla will pay an official visit to Moscow on February 17-18 at the invitation of Russian Deputy Foreign Minister Igor Morgulov,” the MEA had said in a statement.

“The foreign secretary will hold the next round of India-Russia foreign office consultations with Deputy Foreign Minister Morgulov, during which the two sides will review the entire gamut of bilateral relations, including the forthcoming high-level exchanges,” it said.

The foreign secretary will also deliver a speech on ‘India-Russia relations’ at the prestigious Diplomatic Academy of the Russian Ministry of Foreign Affairs, it said.
“Despite the COVID-19 pandemic situation, India and Russia have sustained the momentum of the Special and Privileged Strategic Partnership between the two countries,” the MEA said.