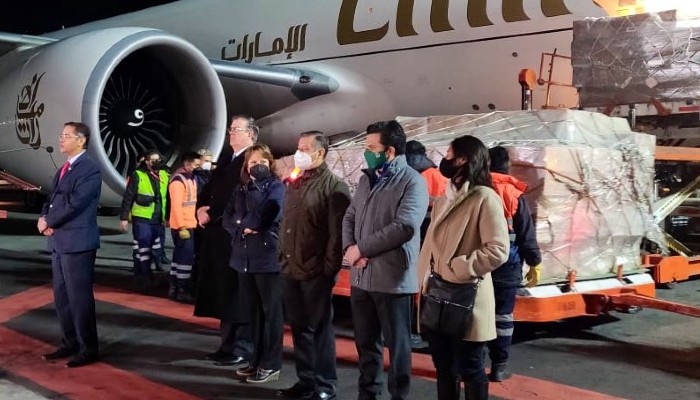 In line with its role as the world’s pharmacy, India is strengthening its engagement with countries in South America by supplying them with Covid-19 vaccines.

On Sunday, Mexico appreciated and thanked India for the largest shipment of vaccines it received. Secretary of Foreign Relations of Mexico, Marcelo Ebrard C. in a tweet thanked External Affairs Minister, S Jaishankar for sending 8,70,000 doses of Serum Institute of India produced vaccines to Mexico to help fight the pandemic.

“The consignment from India is the largest shipment that Mexico has received and will help our vaccination plan,” the Mexican foreign secretary added. Similar to Mexico, a few other Latin American countries have also sought commercial supplies of vaccines from India.

Brazil was amongst the first countries to receive two million doses of the India made vaccines.

Argentina will receive vaccine doses from India on a commercial basis soon, Ministry of External Affairs Spokesperson, Anurag Srivastava said in a press briefing on Friday.

As per media reports, the South American nation is likely to get around 580,000 COVIDHIELD vaccines from Serum Institute of India (SII) which will be transported through DHL. More vaccines are expected to be sent in March.

Meanwhile, Nicaragua in Central America is also set to receive vaccines from India on a grant basis. Almost half a million doses of SII produced vaccines are expected to reach that country this week which will be used for vaccinating its local population, Srivastava further elaborated.

Earlier, New Delhi won hearts in many Latin American countries with the supplies of essential medicines and transfer of skills and knowledge to medical professionals to help cope with the pandemic in this part of the world.

As a part of India’s efforts to support Caribbean and Latin American countries during the initial phase of Covid-19 pandemic, India had pledged five million HCQ tablets for 28 countries as grants. Brazil, Argentina and Colombia, have temporarily scrapped import duties on specific respiratory equipment from India whereas Colombia, Paraguay and Ecuador, have done so on medical equipment such as gas masks and oxygen therapy devices.