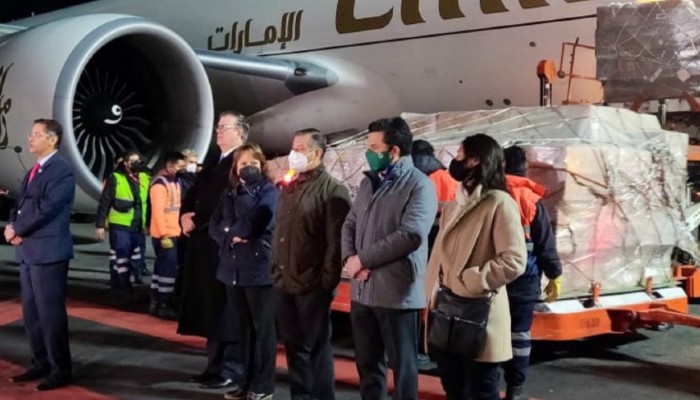 The consignment of Made in India vaccines being received in Mexico

Mexico appreciated and thanked India for the timely and largest shipment of vaccines that the Central American nation received on Sunday, helping strengthen Mexico’s response to the COVID-19 pandemic.


#Mexico's government and people appreciate and thank the government and the people of India, for the timely and largest shipment of #MadeInIndia vaccines to help support Mexico in its response to the #COVID19 pandemic.#VaccineMaitri @DrSJaishankar @MEAIndia @IndianDiplomacy https://t.co/OcWMjIHfAx


Earlier, Jaishankar had tweeted about the consignment reaching Mexico.

“Expressing our Amistad. Mexico receives Made in India vaccines,” he said. ‘Amistad’ is the Spanish term for friendship.


The consignment from India is the largest shipment that Mexico has received and will help the country’s vaccination plan, the Mexican foreign secretary added.

India has rolled out nearly 23 million doses of COVID-19 vaccines to 20 countries around the world, both as grants and commercial supplies.

More doses will be sent to countries in Africa and Latin America in the coming weeks, Ministry of External Affairs Spokesperson Anurag Srivastava had said on Friday.

India’s supplies to Mexico are on a commercial basis, the Spokesperson added. He said Mexico will get almost 2 million doses of vaccines from India on a commercial basis. The doses that reached on Sunday were the first batch and will be followed by another one next month.

Next, Argentina and Nicaragua are set to receive the vaccines from India. Argentina will receive vaccine doses from India on a commercial basis soon, Srivastava informed. Though there is no set date for the vaccines to be sent to that country, it is expected to reach there later next week, he added.

Meanwhile, Nicaragua in Central America is also set to receive vaccine doses from India on a grant basis. Almost half a million doses of AstraZeneca’s vaccine are expected to reach that country in the coming week which will be used for vaccinating its local population, Srivastava further elaborated.