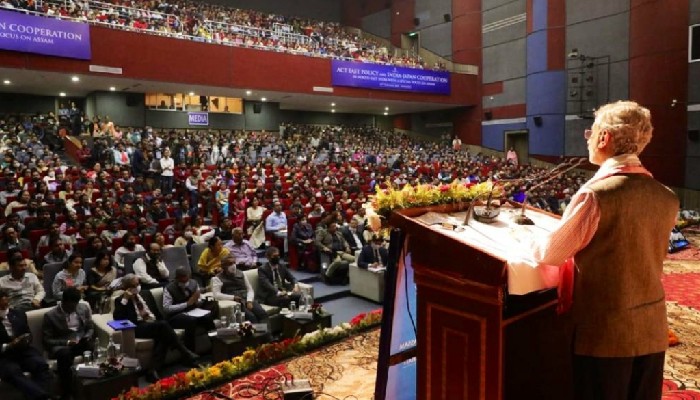 There is a need to encourage stronger cooperation between Assam and international partners to the east, particularly Japan

Considering the importance of physical and cultural connectivity to make the Act East policy successful, the role of Assam as its springboard needs to be fully realized, External Affairs Minister S. Jaishankar said on Monday.

Pointing out the importance of Assam's role, he said one way of fully realising its potential was to encourage stronger cooperation between the state and international partners to the east, particularly Japan.

Speaking on the Act Asia Policy and India-Japan cooperation in NorthEast India in Guwahati, Assam, Jaishankar said the state had long been "the bridge between India and the world to our east".

Japan’s Ambassador to India Satoshi Suzuki and Assam Chief Minister Sarbananda Sonowal were among those present at the event.

He explained that the Act East Policy of the Modi Government has undertaken an approach to create connectivity to and within Assam, beyond to the Northeast, then to neighbouring Myanmar and Bangladesh but eventually push by road, sea and air to Vietnam and Japan.

“A more connected Assam will be a more energetic Assam, a more contributing Assam, and obviously, a more employed Assam,” he pointed out.

He further explained that such an approach will not only service greater economic activity but, as demonstrated in other parts of the world, actually be a driver of it.

He also pointed out that Act East must begin by giving the necessary attention and resources to India's own states in the East and North-East.

He said that Assam can play a critical role for the larger region in terms of power, transportation, and energy and even in the movement of people.

This obviously takes not only a vision, but also diplomacy to realise it and the resources to make it happen. That has been the focus of the Modi government to the region and its neighbours, he added.

Pointing out that Assam has long been the fulcrum of the North-East region, he explained that it can be the centre of a hub that covers neighbours like Myanmar, Bangladesh and Bhutan.

“This is especially so as our ties with those countries has undergone a dramatic transformation since the Modi Government initiated the Neighbourhood First policy in 2014,” Jaishankar said.

During his talk, he also explained that a sound foreign policy can contribute directly to the progress of the nation, region and of a state.

Maintaining that the world had changed profoundly in the past few decades and there were tremendous opportunities, he stressed on the need "harness our international partnerships for national growth and development".

There was a need to not just build strong relationships abroad, but also to have the vision, the policies, and the determination to apply those partnerships at home, the External Affairs Minister explained.

Speaking about the strong cooperation that India has with Japan, he said that it had made a difference to the people of India, particularly to the development of Assam.

Japan had long been involved in the expansion of India’s economic and social infrastructure, he said, adding that it had funded roads, rail, urbanization and energy across states and cities.

The world had changed very profoundly in the last few decades, Jaishankar said, adding that new focal points of production, consumption had emerged, particularly in Asia.

Earlier, reviewing the progress of the Japan International Cooperation Agency (JICA)-funded Guwahati water supply project site along the Brahmaputra, Jaishankar described it as an example of "foreign policy that makes a difference to the lives of people".

A foreign policy that makes a difference to the lives of people.

At the JICA-funded Guwahati water supply project site along the Brahmaputra. Reviewing its progress along with the Japanese Ambassador @EOJinIndia pic.twitter.com/unxhaY4AUl

Japanese Ambassador to India Satori Suzuki said his country was "pleased to support this important project. Clean water will soon flow to the homes in Guwahati #Assam!