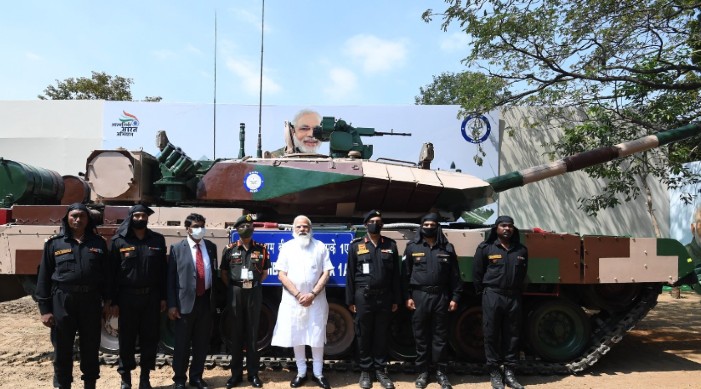 Prime Minister Narendra Modi on Sunday handed over indigenously developed Arjun Main Battle Tank (MK-1A) to the Army at a function in Chennai.

“Today, I am proud to dedicate to the country one more warrior to protect our frontiers. I am proud to hand over the indigenously designed and manufactured “Main Battle Tank Arjun Mark 1A,” the Prime Minister said.

According to reports, the battle tank has 71 major and user driven upgrades, including increased mobility and fighting capabilities, thereby making it a top grade military hardware.

The Prime Minister maintained that India has undertaken a massive effort to become self-reliant in the defence sector. “One of the two defence corridors is in Tamil Nadu. The corridor has already received investment commitments over Rupees Eight thousand one hundred crores.”

Terming Tamil Nadu as the tank manufacturing hub of India, the Prime Minister said: “ A tank made in Tamil Nadu will be used in our northern borders to keep the nation safe. This showcases India's united spirit – Bharat's Ekta Darshan. We will continue working to make our armed forces one of the most modern forces in the world.”

“The focus on making India ‘Aatmanirbhar’ in the defence sector moves with full speed. Our armed forces signify India's ethos of courage. They have shown time and again that they are fully capable of protecting our motherland. Time and again they have also shown India believes in peace. But, India will protect our sovereignty at all costs. धीर भी है, वीर भी है , सैन्य शक्ति and धैर्य शक्ति of our forces are remarkable,” he added.