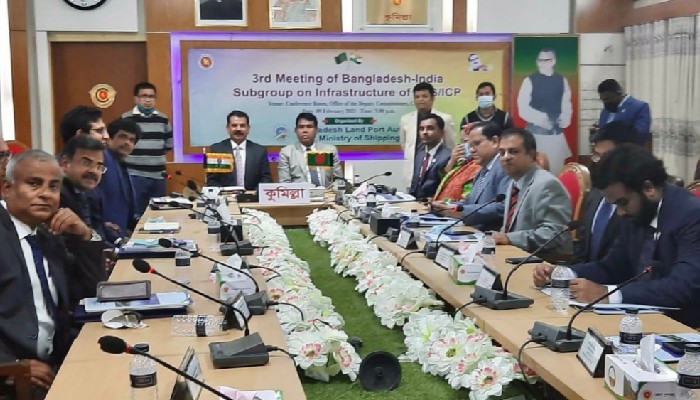 Representatives from both sides during the review meeting.

Continuing with the consultations and joint development for better facilitation of cross-border trade, India and Bangladesh reviewed existing ongoing infrastructure development activities and agreed to further strengthen the existing cooperation.

The current status was reviewed at the 3rd meeting of the India-Bangladesh Subgroup on Infrastructure of Integrated Check Post/ Land Customs Stations held in Cumilla,. Bangladesh from February 9 to 11.

The Land Ports Authorities of India (LPAI) said that members of the delegation visited two land ports at Bibirbazar-Srimantapur and Belonia-Muhurighat. They inspected the ongoing infrastructure development activities at these land ports.

According to information provided by the LPAI through a series of Twitter posts, the wide-ranging discussions included mutual cooperation on upgradation of existing port infrastructure facilities, establishment of quarantine facilities, construction of development works within 150 yards of the international border and information sharing between port officials.

Noting satisfaction about the progress made in the bilateral trade and commercial relations between India and Bangladesh, the two sides agreed to further strengthen the existing cooperation, officials said.

They also said that the next meeting of the subgroup would be held in September this year.