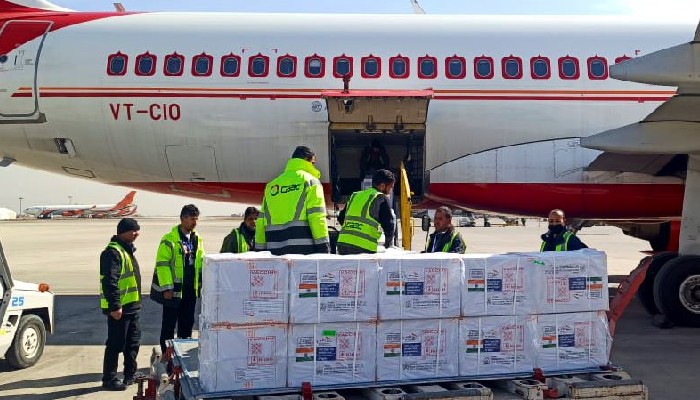 India made vaccines reaching every corner of the world

In the two months since China started its vaccination drive, Beijing could administer just over 31 million doses till February 4

Chairman of China National Biotec Group (CNBG) Yang Xiaoming on Monday said Sinopharm, which is the leading producer of vaccines in China, can increase its production capacity to over a billion doses in 2021. He also claimed that China can produce high-quality vaccines faster under safety standards. However, on account of lack of transparency in the Chinese vaccines’ production and trial, many people within China are resisting getting inoculated by Sinovac or Sinopharm produced vaccines.

Nearly two months since China’s vaccination campaign began on December 15, Beijing could administer just over 31 million doses till February 4, though it had set the target of vaccinating 50 million people by the Spring festival travel rush. Chinese health authorities on February 4 said that 31.236 million doses have been given so far, which is far short of the 100 million shots required to inoculate 50 million people under a two-dose regimen required by Chinese vaccines.

Reason cited for the slower pace of vaccination is that there is high concern among Chinese people over locally developed vaccines. Lack of transparency on the safety and effectiveness of vaccines’ shots, has led Chinese people to believe that they should avoid vaccination rather than falling sick or suffer after getting inoculated.

Also, Chinese vaccine companies release less data compared to their Indian or western counterparts. Chinese Foreign Ministry Spokesperson Wang Wenbin on Sunday claimed that Beijing would be providing aid to 53 countries and has already supplied doses to 22 countries. But, countries in Asia-Pacific region are apprehensive about the Chinese vaccines.

In the Philippines, lawmakers have questioned the government’s decision to buy a vaccine made by the Chinese company, Sinovac. Malaysia and Singapore ordered several doses of vaccines from Sinovac, but authorities of these two countries have had to reassure their people that they would give go ahead to the Chinese vaccines only after they are satisfactorily proven as safe and effective.

Nepal recently complained to the Chinese embassy in Kathmandu that Sinovac has not yet provided required documents to it regarding the vaccines to be used in the Himalayan country.

According to leaked correspondence between Kathmandu and Beijing, the latter is believed to have put pressure on Nepal to accept its Covid-19 vaccine without establishing its efficiency and efficacy.
Cambodia, known to be under Chinese sphere of influence, days after having received 1 million vaccines from Beijing as donation requested India to supply vaccines saying Chinese vaccines would not be enough for Phom Phen.

Another Southeast Asian country, Indonesia haunted by the memories of defective China-made medical equipment has refused to avail the Chinese vaccine.

Compared to China, India has consolidated its relationship with its allies and partner nations through its ‘Vaccine Maitri’ initiative.

Living up to its expectation of being the pharmacy of the world, India has already supplied Covid-19 vaccines to 17 countries amounting to 56 lakh doses under grant and over 1 crore vaccines on a commercial basis.

Extending its assistance to the neighbourhood, all SAARC countries except Pakistan have received Indian made vaccines as a gift. New Delhi has also been able to supply vaccines to Myanmar, Mauritius and Seychelles, Gulf countries like UAE, Bahrain, Oman and Kuwait, African nations like Algeria, Morocco, South Africa and Sierra Leone, Caribbean nations like Barbados and Dominica.

India has also supplied vaccines to Brazil as part of a commercial deal, despite Rio de Janeiro signing a deal for Chinese made vaccines. Brazilian trials have found the Chinese made Sinovac vaccine to be only 50.4 percent effective against the deadly virus.

While China is struggling hard to convince allies and partner countries about the efficacy of its vaccines, New Delhi is expanding the horizons of its diplomatic outreach through vaccines.