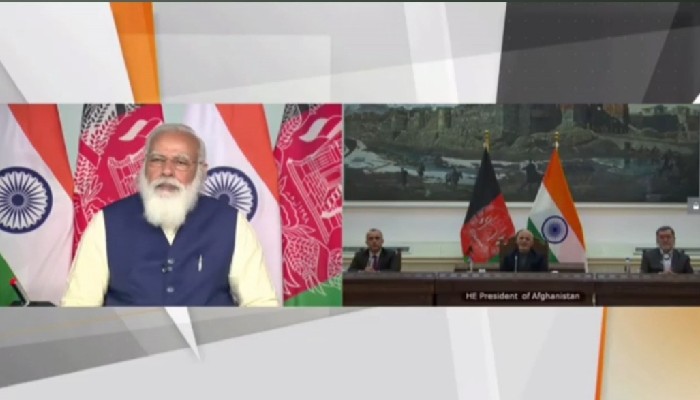 PM Narendra Modi during the signing of the MoU.

Adding yet another milestone to the long course of historical relations between India and Afghanistan, the two countries on Tuesday signed an agreement for construction of the Lalandhar (Shatoot) dam which will meet the water supply needs of Kabul city and adjoining regions.

Part of the New Development Partnership between India and Afghanistan, this will be the second dam to be built by India in the war-torn country.

“Today the foundation that we are laying for the Shatoot dam will not just be built in brick and mortar but hinges on the friendship between India and Afghanistan,” Prime Minister Narendra Modi said on the occasion of the signing ceremony of the Memorandum of Understanding that took place virtually.

During his address, Prime Minister Modi also called for an immediate ceasefire in Afghanistan. He assured India's continued support for a peaceful, united, stable, prosperous and inclusive Afghanistan.

Expressing concern over the rise of incidents of violence in Afghanistan, the Indian Prime Minister said “Innocent citizens, journalists and workers alike have been targets of these dastardly attacks. India has called for shunning violence and supports ceasefire.”

Reiterating that India has backed an Afghan-led peace process that is in the interests of Afghanistan’s sovereignty and in tune with its nation-building efforts, Prime Minister Modi called for bringing cohesive unity among its people.

Referring to India's efforts to bring peace in Afghanistan, President Ghani thanked India for its principled support for a sovereign, democratic, and united Afghanistan.

The MoU on the dam was signed by External Affairs Minister S Jaishankar and Afghanistan Foreign Minister Hanif Atmar, in the presence of Prime Minister Modi and President of Afghanistan Mohammad Ashraf Ghani.

Recalling Kabul’s closeness to Indian hearts, Prime Minister Modi expressed happiness that the dam would help in meet the safe drinking water needs of the city, provide irrigation water to nearby areas, rehabilitate the existing irrigation and drainage network, aid in flood protection and management efforts in the area, and also provide electricity to the region.

Noting that India has emerged as one of the largest development partners of Afghanistan in the past two decades, Prime Minister Modi recalled New Delhi’s support to various schemes in Afghanistan that include infrastructure, capacity-building, agriculture, education and health.

Prime Minister Modi highlighted that the successful completion of projects in Afghanistan through Indian assistance such as laying transmission line from Pul-e-Khumri to Kabul in Afghanistan, the Zaranj-Delaram highway, construction of the India- Afghanistan Friendship Dam (Salma Dam) and the building of Afghan Parliament has strengthened the partnership between the two countries.

The same friendship and closeness was also evident during the Covid-19 pandemic from cooperation in medicines to supply of Indian made vaccines, he said, adding that Afghanistan’s needs have always been important to India.

He remarked that a united Afghanistan is capable of tackling any challenge, adding that in Afghanistan’s success is a reflection of the success of the whole region.

Lalandar (Shatoot) Dam is the second major dam being built by India in Afghanistan, after the India- Afghanistan Friendship Dam (Salma Dam), which was inaugurated by Prime Minister Modi and the Afghan President in June 2016.

According to the Ministry of External Affairs, signing of the MoU is a reflection of India’s "strong and long-term commitment towards the socio-economic development of Afghanistan and the enduring partnership between our two countries".

As a part of India’s Development Cooperation with Afghanistan, more than 400 projects have been completed covering all 34 provinces of Afghanistan.