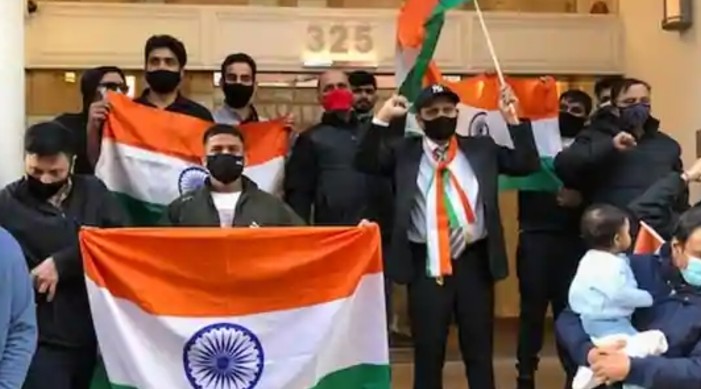 Participants at the pro-India rally waved Indian flags in front of Indian Consulate in Vancouver, Canada

Groups of people of Indian origin living in Canada convened against the alleged role of Khalistani separatists in the ongoing farmers’ protests in India. Participants waved Indian flags in front of the Indian Consulate in Vancouver in a symbolic rebuff to the blockade by protestors on 26 January, a report in Hindustan Times said.

Khalistani flags were flown during the Republic Day protest in front of the Indian Consulate in Vancouver and among the organizers was founder of the Poetic Justice Foundation, Mo Dhaliwal that was the mastermind behind the ‘toolkit’ for organizing criticism of the Indian government with regard to the farmer’s agitation.

Among those who organized Saturday's pro-India rally were Neema Manral, resident of the Delta region of British Columbia and a provincial politician. Manral argued that the protest was an expression of the pent up anger and frustration on what happened on the Republic Day.

“There was so much anger within the community here over what happened in New Delhi on Republic Day, that we had to do something,” Manral explained adding that the Indo-Canadian community respected the views of the protesting farmers but their cause had been hijacked by separatist elements in Canada and elsewhere.

Meanwhile, Indo-Canadian groups continued to reach out to Canadian Prime Minister Justin Trudeau to underscore the importance of relations with India, which were undermined by his remarks on the farmers’ protests.

A letter by Ottawa-based Overseas Friends of India Canada stated, “It is no surprise that a single comment at this moment has put us on the back foot with regard to our relations with India. It is imperative for Canada to maintain a just stance especially when it comes to a close ally like India.”