25 countries in the 'queue' for Made in India COVID-19 vaccines: S Jaishankar 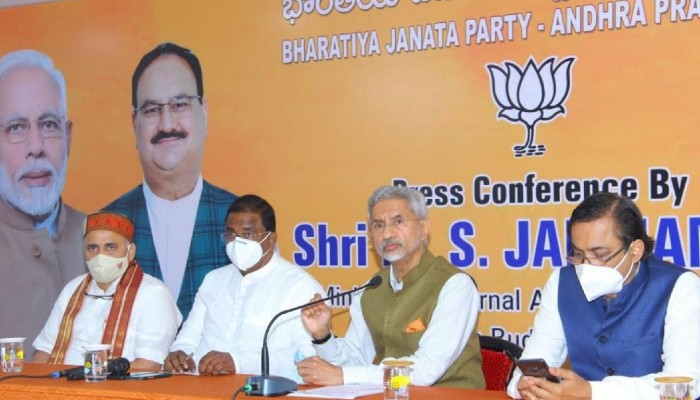 COVID will establish India as the pharmacy of the world, External Affairs Minister S Jaishankar said

While India has already supplied COVID- 19 vaccines to 15 countries, another 25 nations are in the queue at different levels for the vaccine doses, External Affairs Minister S Jaishankar said today.

He said there are three categories of countries which are keen to get the vaccine from India. These include poor and lesser developed countries, countries that wanted to pay a reasonable price, and others which were dealing directly with the pharmaceutical companies manufacturing the vaccines.

"I think right now we have already supplied to about 15 countries, as per my recollection. I would say there would be another about 25 countries which are at different stages in the pipeline. But what it has done is today it has put India on the map of the world," Jaishankar told reporters during a press conference in Vijayawada, Andhra Pradesh.

He explained that there were three categories of requests for COVID-19 vaccines.

Some poor and less developed countries had requested for vaccines on a grant basis while others had sought vaccines at the same cost that the Indian government pays to the manufacturers. The third category includes countries which have directly contracted the vaccine producing companies and have negotiated commercially, Jaishankar said.

He also referred to Prime Minister Narendra Modi's idea to establish the country as the "Pharmacy of the World", taking advantage of the domestic capabilities and the way India emerged as an IT leader during the Y2K issue.

In early January, India's national regulator has authorised the use of two COVID-19 vaccines - the Oxford-AstraZeneca Covishield vaccine manufactured by the Serum Institute of India and Bharat Biotech's Covaxin. Another pharm firm, Dr Reddys is reported to be planning to apply for regulatory approval for the Russian Sputnik V vaccine in March.

India had earlier supplied medicines like HCQ and paracetamol to over 150 countries, Jaishankar pointed out.

According to the External Affairs Minister, health was not only a requirement for our well-being, it was also a great opportunity for employment.