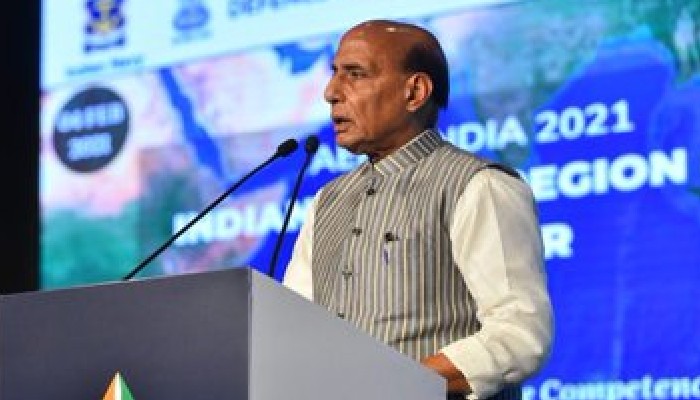 Referring to India’s growing aerospace and defence sector and its emergence as a global R&D hub with one of the world’s largest startup ecosystems, the Defence Minister said IOR countries can leverage these sectors for mutual benefit.

He said the recent order from the Indian Air Force to buy 83 Light Combat Aircraft (LCA) Tejas MK-1A from Hindustan Aeronautics Limited (HAL) is a milestone in India’s indigenization of defence manufacturing capabilities.

“This was reflected in India’s supply of Indian made ships, maritime aircraft and setting-up of Coastal Surveillance Radar Systems,” he said.

The Defence Minister said India was developing a comprehensive maritime domain awareness picture in the IOR, which has resulted in signing of technical agreements for sharing of ‘White Shipping Information’.

He added that Humanitarian Assistance and Disaster Relief (HADR), Non-combatant Evacuation (NEO), and Search and Rescue (SAR) Operations are important and highlighted India’s swift response during the cyclones in Mozambique and Madagascar and reaching out to countries through medical teams, medicines such as hydroxychloroquine, remdesivir and paracetamol tablets, diagnostic kits, ventilators, masks, gloves and other medical supplies through Operation-Sagar-I during COVID times.

He further said that Op-SAGAR-II saw over 300 metric tons of humanitarian aid being delivered to 4 nations in the IOR.

He said India was conducting training programmes for immunization managers, cold chain officers, communication officers and data managers of the recipient countries before delivery of the vaccines.

He highlighted development of effective response mechanisms to humanitarian crises and natural disasters in the IOR region as one of the most visible elements of India’s Indian Ocean strategy.

Twenty six out of 28 countries from the IOR region attended the conclave either physically or in virtual mode. He termed it as a symbol of the collective desire of the nations of the IOR region to work together.

He said 75 percent of global trade and 50 percent of daily global transfers already pass through the region. He further said the deployment of ships by the Indian Navy and the Indian Coast guard for maritime security and anti-piracy operations had been successful in minimising threats to commercial shipping.