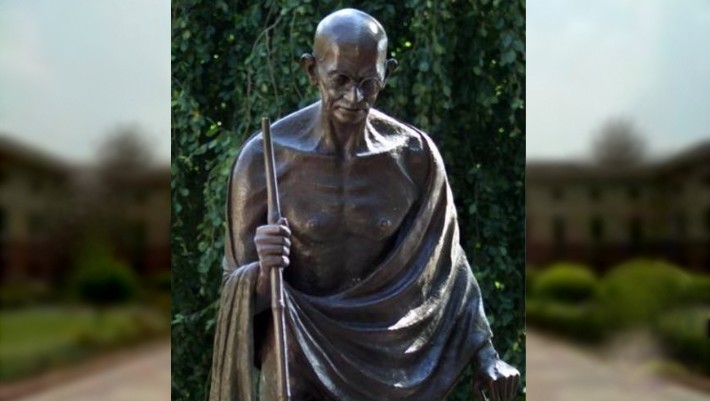 Several Indian-American congressmen have condemned the act of vandalisation of the statue of Mahatma Gandhi in California, while one of them has sought an FBI investigation into the matter on Tuesday.

A bronze statue of Gandhi in the Central Park of the city of Davis in Northern California was vandalised, broken and ripped from the base by unknown miscreants last week. The city has registered a case and is investigating the incident.

"I condemn this malicious act in the strongest terms and I call upon the FBI to investigate it as a possible hate crime intended to intimidate Indian-Americans, among others," Congressman Raja Krishnamoorthi was quoted in a PTI report carried by Times News Network.

"The desecration of a statue of Gandhi, who championed peace and non-violence and who continues to influence countless non-violent struggles for justice including in America, serves as a sad reminder of how important his teachings remain," he said.

In a separate statement, Congressman Ami Bera condemned the vandalisation of the statue.

"Peaceful and nonviolent protest, which was championed by civil rights leaders at home and abroad, including Dr Martin Luther King Jr and Gandhi, is a hallmark of American democracy,” Bera was quoted as saying in the report.

"The strength of our country lies in our diversity, but also in our ability to peacefully express our opinions and differences. Vandalisation and destruction of property is unacceptable and has no place in our society," he said.

"Gandhi stood for peace, nonviolence, and justice. We are better than acts of hate like this," tweeted Congressman Josh Harder.

Congressman Pete Session said the statue of Gandhi was donated by the government of India to all Americans as a symbol of peace. "This hate crime must not be tolerated. Restoration of this great statue must be done," he tweeted.

On Tuesday, the White House had also condemned desecration of Mahatma Gandhi’s statue in California.