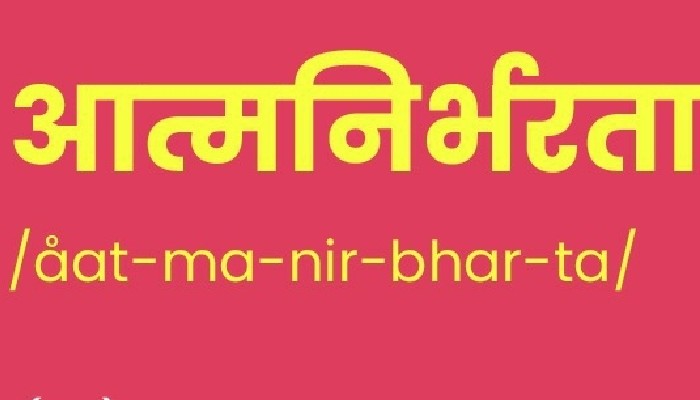 'Aatmanirbharta' implying self-reliance has been named by Oxford Languages as its Hindi word of the year 2020 as it "validated the day-to-day achievements of the countless Indians who dealt with and survived the perils of a pandemic".

The Oxford Hindi word of the year is a word or expression that is chosen to reflect the ethos, mood, or preoccupations of the passing year, and have lasting potential as a term of cultural significance.

In a statement, Oxford Languages said in the early months of the pandemic when Prime Minister Narendra Modi announced India's COVID-19 recovery package, he emphasized the need to become self-reliant as a country, as an economy, as a society, and as individuals, in a bid to navigate the perils of the pandemic.

In a post on Twitter, MyGovIndia elaborated on Prime Minister Narendra Modi’s emphasis on the concept which had led to the decision by Oxford Languages.

#DoYouKnow: After PM @narendramodi's emphasis on #Aatmanirbharta, this particular word has been named by Oxford Languages as Hindi Word of the Year 2020 because it "validated the day-to-day achievements of the countless Indians who dealt with & survived the perils of a pandemic". pic.twitter.com/hX1KZwdVGT

“We saw a significant increase in the usage of Aatmanirbharta (self-reliance) following the Prime Minister’s address, highlighting its increased prominence as a phrase and concept in the public lexicon,” the Oxford Language statement read.

“That is not to say the concept of self-reliance is new; it draws similarities with Gandhi’s vision of a self-sufficient village economy where the villages would be independent economic units. Tracing back to India’s more recent history, in the year 1965 we were led through tough times in a similar manner by then Prime Minister Mr. Lal Bahadur Shastri. Mr. Shastri was the driving force for the creation of a self-sufficient India and a self-reliant India,” the statement added.

The statement noted that on an individual level, 2020 required self-reliance more than ever before.

“From homeschooling to remote working, from creating our own means of entertainment to finding ways of keeping ourselves physically fit within confined spaces, from cooking for ourselves to caring for ourselves, and being forced to remain away from family and loved ones for extended periods of time, what has gotten many of us through is self-reliance,” it said.

One of the standout successes of the entire 'Aatmanirbhar' Bharat or self-reliant India campaign is the large-scale manufacturing of the COVID-19 vaccine in India.

During the Republic Day parade on 26th January, the Department of Biotechnology highlighted the Atmanirbhar Bharat campaign and showcased the Covid-19 vaccine development process in their tableau at Rajpath.

"In an unprecedented year, 'aatmanirbharta' found resonance with a wide cross-section of people as it is seen to be an answer to the revival of a COVID-impacted economy," the Oxford University Press India managing director Sivaramarkrishnan Venkateswaran was quoted as saying by a news agency.