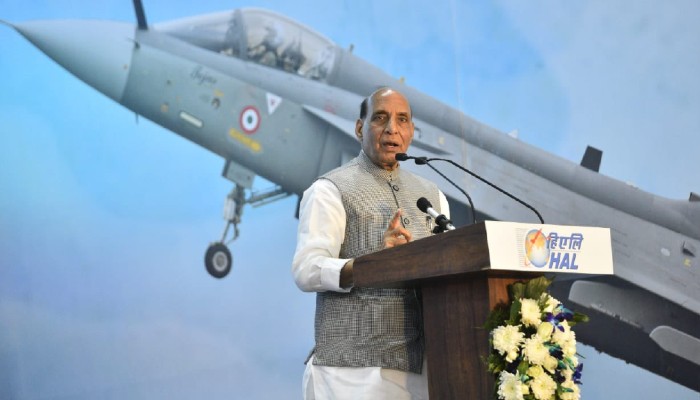 Many countries have shown interest in the LCA Tejas, the Defence Minister said while inaugurating a new production line

Many countries have shown interest in India's LCA Tejas which was better than its foreign equivalents on many parameters, Defence Minister Rajnath Singh has said.

"Tejas is not only indigenous, but it is also better than its foreign equivalents on several parameters and also comparatively cheaper," he said while inaugurating the Hindustan Aeronautics Limited's second LCA-Tejas Production Line in Bengaluru today.

India is looking forward to increasing its defence manufacturing capabilities under the ‘Aatmanirbhar Bharat Abhiyan’, the Defence Minister said, pointing out that the country cannot remain dependent on other countries.

Singh said India will achieve the target of Rs 1.75 lakh Cr in the field of defence manufacturing in a few years.

After the cabinet approval, Singh had said the LCA-Tejas was going to be the backbone of the Indian Air Force’s Fighter Fleet.

An additional Rs 1,202 crore has been sanctioned for design and development of infrastructure for the aircraft.

The LCA Tejas is a multi-role fighter with advanced avionics, glass cockpit, and a digital quadruplex fly-by-wire control system.

The Mk-1 A variant of the LCA Tejas is an indigenously designed, developed, and manufactured state-of-the-art modern 4+ generation fighter aircraft.

According to the Ministry of Defence, it is equipped with critical operational capabilities of Active Electronically Scanned Array Radar, Beyond Visual Range Missile, Electronic Warfare Suite and Air to Air Refuelling (AAR)