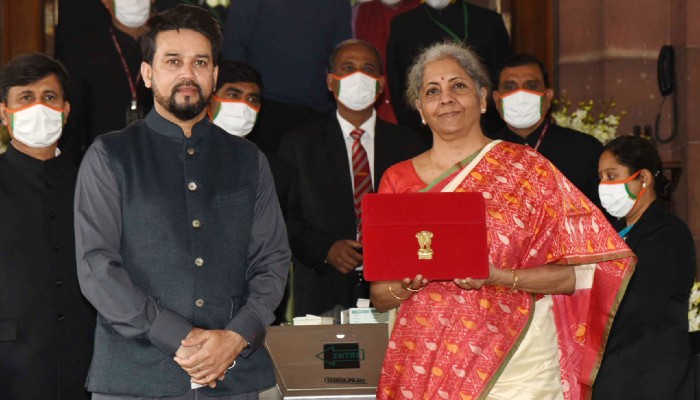 Health, infrastructure, and education are among the several focus areas of this year’s Union Budget

Union Finance Minister Nirmala Sitharaman on Monday announced a package of Rs 27.1 lakh to deal with the COVID-19 pandemic under the Atmanirbhar Package while presenting the Union Budget 2021 in the Parliament.

India has approved two vaccines, Covaxin and Covishield and two more vaccines are in pipeline, said Finance Minister Sitharaman. The government will provide Rs 35,000 crore for the COVID-19 vaccination. The Finance Minister has committed to providing more funds.

“The government is committed to providing more funds. The Budget outlay for health and welfare is Rs 2,23,846 crore in the 2021-22 Budget. This is a 137 percent increase,” she said.

Finance Minister Sitharaman said that "Government aims to complete 11,000 km of national highway infrastructure this year." Tamil Nadu gets a corridor of 3,500 km. Kerala will get a 1,100 km corridor which includes investment worth Rs 65,000 crore, 675 km in West Bengal which costs Rs 95,000 crore, and 1,300 km in Assam promised over the next three years.

Scrapping of Income-tax for senior citizens

In significant changes to the taxation process, Sitharaman announced the scrapping of income tax for senior citizens under certain conditions, new rules for removal of double taxation for Non-Residential Indians, and a reduction in the time period of tax assessments among other measures. Sitharaman also announced that the advance tax liability on dividend income shall arise after the declaration of payment of dividend.

The Finance Minister announced that the government will increase the maximum threshold paid-up capital of small companies from Rs 50 lakh to Rs 2 crore and increase the threshold of maximum turnover from Rs 2 crore to Rs 20 crore.

Sitharaman said, “The Government removes threshold limits of paid-up share capital of Rs 50 lakh and an average annual turnover of Rs 2 crore over the past three financial years. The government has also eased requirements of residency for a person setting up a One person company from 182 days to 128 days in India.”

Sitharaman announced Rs 3.05 lakh crore for the power sector in the country. The Finance Minister added that 100 more cities will be added to the gas distribution network in the next three years.

Sitharaman announced a cess on certain items, including petrol, diesel, gold, and some imported agricultural products in an attempt to boost agriculture infrastructure. The budget has imposed a Rs 2.5 per liter Agri infra cess on petrol, Rs 4 on diesel. Agri infra cess has been imposed on several things including 100% on alcoholic beverages, 30% on Kabuli chana, 10% on peas, 50% on Bengal gram/chickpeas, 20% on lentil (mosur); 5% on cotton,17.5% on crude palm oil, 20% on crude soybean, sunflower oil, 2.5% on gold, silver and dore bars; 35% on apples; 5% on specified fertilizer; 1.5% on coal, lignite, and peat.

FM Sitharaman proposed an increase in agriculture credit target to Rs. 16.5 lakh crore. She said, "The MSP regime has undergone a change to assure a price that is at least 1.5 times the cost of the production across all the commodities. The total amount paid to paddy farmers surged to Rs 1.72 lakh crore on 2020-21."

Amid the protest from opposition leaders, the Finance Minister said, "The government is committed to the welfare of farmers. The MSP has gone through a sea change. Over Rs 75,000 crore paid to wheat farmers in the years 2020-21; 43.36 lakh farmers have benefited from this."

During her speech, Sitharaman also proposed a portal to collect info on gig-workers, building, and construction workers. “Social security benefits will be extended to gig and platform workers. Minimum wages will apply to all categories of workers. Women will be allowed to work in all categories and also in night shifts with adequate protection. To further extend efforts towards unorganized labor force, I propose to launch a portal to collect relevant information on gig workers, building/construction workers among others. It’ll help formulate health, housing, skill, insurance credit, and food schemes for migrant workers,” the FM said.

Allocation of Rs 300 cr to Goa

Further, Sitharaman announced an allocation of Rs 300 crore to the state of Goa for celebrating the 60th anniversary of the liberation from Portuguese rule.

The Finance Minister announced Rs. 1,500 crore for promoting a digital mode of payment.

She announced Rs 3,768 for the census. The next census will be the first digital census in the history of Independent India.