Country was saddened by insult to Tricolor on January 26: PM Modi 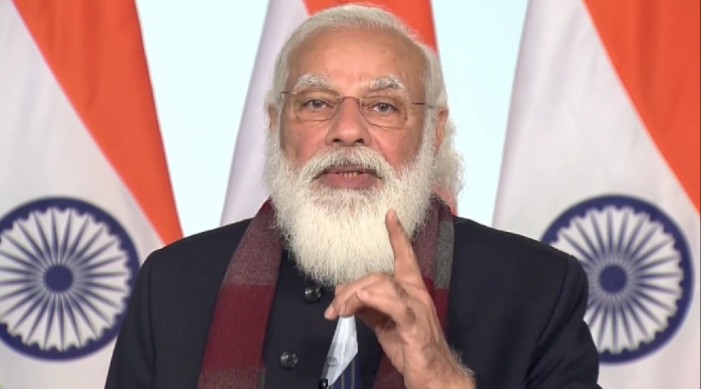 The country was saddened by the insult to the Tricolor on the 26th of January in Delhi, Prime Minister Narendra Modi said on Sunday, referring to the incidents at Red Fort during the tractor rally taken out by farmers protesting against the new farm laws.

Several groups of farmers had deviated from the Delhi Police approved routes for the tractor rally and entered the capital city, with some unfurling a religious flag at the Red Fort in what was seen as an insult to the national flag that flies on the ramparts of the historic building.

Addressing the people through his monthly Man ki Baat broadcast, Prime Minister Modi, however, sought to strike a positive note for the future and said, "We have to infuse times to come with new hope and novelty".

Pointing out that everybody had displayed exemplary patience and courage last year, he exhorted people to "work hard to attain our resolves," this year too. There was a need to take India forward at a faster pace, he pointed out during the broadcast.

The Prime Minister's remarks came barely two days after President Ram Nath Kovind had condemned the incidents during his address to the joint session of Parliament on the opening day of the Budget session.

Addressing an all-party meet on Saturday, Prime Minister Modi had said the Centre was approaching the issue of farm laws with an open mind. He said the government's stand was the same as it was on January 22, and the proposal given by the Agriculture Minister still stands.

Several farmer's organisations have been protesting against the three farm laws, demanding that they be repealed. Several rounds of talks between the government and farmers' unions have failed to break the impasse.

The government has offered to keep the implementation of the laws in abeyance for a period of one to one-and-a-half years. During this time representatives of farmers’ unions and the government can discuss all issues related to the farmers’ agitation so that an appropriate solution can be arrived at, Union Agriculture Minister Narendra Tomar had said during the last round of talks.