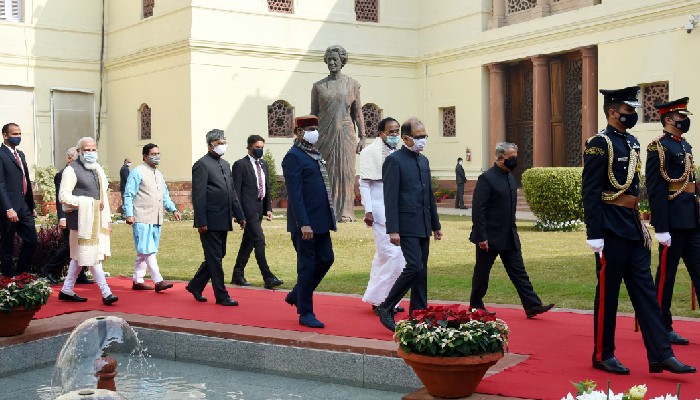 President Ram Nath Kovind on his way to address the joint session of Parliament.

The three new farm laws do not affect in any way the rights and facilities available under the system prevailing before their enactment, President Ram Nath Kovind said on Friday.

"Rather, through these agricultural reforms, the Government has provided new facilities to the farmers and has empowered them," he said while addressing the joint session of both houses of Parliament on the opening day of the Budget Session.

Condemning the incidents of violence during the farmers' tractor rally in the national capital Delhi on Republic Day, the President said the recent acts of dishonouring the National Flag and showing disrespect to the auspicious occasion of the Republic Day are unfortunate. "While the Constitution gives us the right to freedom of expression it is also expected that we abide by the laws and rules with equal sincerity," he pointed out.

Maintaining that the government respected the Supreme Court's decision to stay these laws and would abide by it, he pointed out that three important farm reform bills were approved by Parliament seven months ago after extensive consultation.

According to President Kovind, the benefits of the three Bills - The Farmers' Produce Trade and Commerce (Promotion and Facilitation) Bill, The Farmers (Empowerment and Protection) Agreement on Price Assurance and Farm Services Bill, and the Essential Commodities (Amendment) Bill, had started reaching more than 10 crore small farmers instantly.

Appreciating the advantages that these reforms would bring to the small farmers, several political parties too had, from time to time, expressed their support. The discussions over these farm reforms in every part of the country for over two decades and the demand for these reforms at different fora were also reflected during the deliberations in the House, he said.

The government had made continuous efforts to dispel the misunderstanding about these laws and had "always respected freedom of expression and holding of peaceful agitations in a democratic set up".

The government also accords priority to the small and marginal farmers who make up nearly 80 per cent of the country's 10 crore farmers, President Kovind said during his address, adding that almost Rs 1,13,000 crore had been directly transferred to their bank accounts under the Pradhan Mantri Kisan Samman Nidhi.

The Pradhan Mantri Fasal Bima Yojana had also benefited small farmers, with about Rs 90,000 crore being paid as compensation to the farmers against a premium of Rs 17,000 crore over the last five years.

Another important step referred to by the President was the mission to set up 10,000 Farmer Producer Organisations (FPOs) by bringing together small farmers of the country.

"This has ensured access of small farmers to better technology, additional credit, post-harvesting processing and marketing facilities and insurance coverage during natural calamities, on the same footing as the rich farmers," President Kovind said.