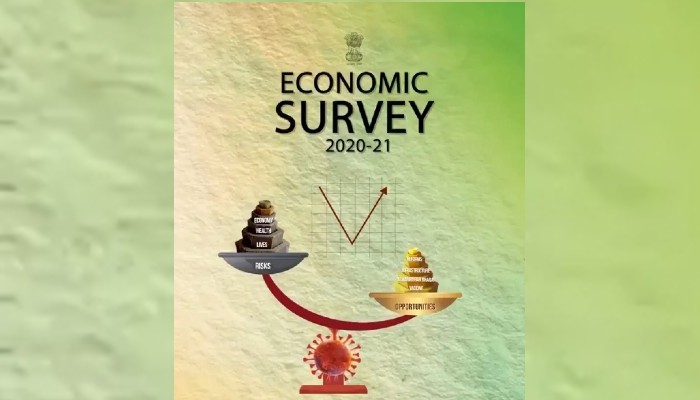 The Economic Survey is released before the Union Budget every year.

India’s economy is likely to rebound with an 11 percent growth in the next financial year as it makes a ‘V-shaped’ recovery after witnessing a Covid-19 pandemic-led slowdown, the pre-Budget Economic Survey 2021 said on Friday.

“After an estimated 7.7 percent pandemic-driven contraction in 2020-21, India’s real GDP is projected to record a growth of 11.0 percent in 2021-22 and nominal GDP by 15.4 percent. These conservative estimates reflect upside potential that can manifest due to the continued normalization in economic activities as the rollout of COVID-19 vaccines gathers traction,” the survey said.

Even though the survey forecast a "V-shaped" economic recovery, it also cautioned that it would take at least two years to go back to the pre-pandemic gross domestic levels.

According to the Economic Survey, this recovery is expected to be just the beginning of a strong era of economic growth in India. Further improvement and firming up in industrial activities, enhanced capital expenditure by the Government, the vaccination drive, and the resolute push forward on long-pending reform measures are expected to provide the much-needed support to the ongoing recovery path.

Further, the survey observed that the growth of infrastructure in the country has remained a key priority for the Government.

“The strong forward-backward linkages of the infrastructure sector are well established. Therefore, investment in infrastructure is quintessential for more rapid and inclusive economic growth,” it said.

Noting the sector-wise growth in 2020, the survey said that total investment in the Roads and Highway sector has gone up more than three times in the six years from FY15 to FY20 which also led to increased road density across the States.

Despite the severe challenges posed by Covid-19, the Indian aviation industry has persevered through the crisis and demonstrated long-term resilience and full commitment to serve.

“The aviation market of India is one of the fastest-growing in the world. India’s domestic traffic has more than doubled from around 61 million in FY14 to around 137 million in FY20, a growth of over 14 percent per annum,” the survey said.

The survey highlighted the great strides in the electricity sector, which is essential for powering economic activity.

Earlier in the week, the International Monetary Fund projected an impressive 11.5 percent growth rate for India in 2021, making the country the only major economy in the world to register double-digit growth this year amid the pandemic.

The projection for next year is in line with the International Monetary Fund’s estimate for 11.5% expansion, which will once again make India the fastest-growing major economy in the world ahead of China’s 8.1 percent pace, it said.

The government may miss its fiscal deficit target of 3.5% of GDP this fiscal, the Economic Survey said. “In order to sustain the recovery in aggregate demand, the government may have to continue with an expansionary fiscal stance," it said.

The survey said there is a need for more sustained and calibrated measures to facilitate the process of economic recovery in the new fiscal year.