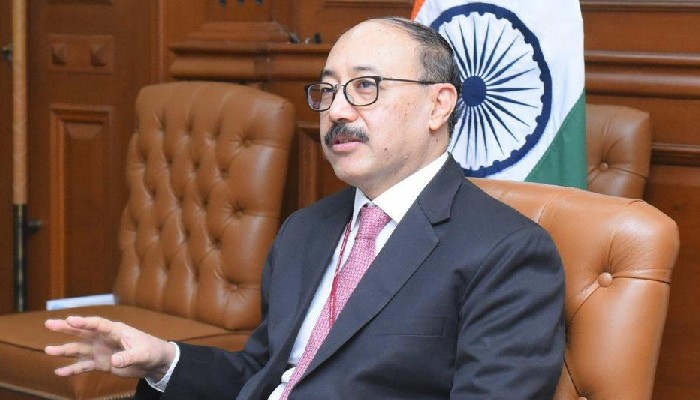 Participating at the fifth joint meeting of the India-Japan Act East Forum, Foreign Secretary Harsh Vardhan Shringla on Thursday described the initiative as “an effective platform” to facilitate connectivity and developmental projects in India’s Northeast region.

Expressing his happiness on India’s collaboration with Japan in different projects for economic modernization of the Northeast, he said setting up of the AEF “reflects the synergy between India’s Act East Policy and Japan’s vision for a free and open Indo-Pacific.

The AEF brings together in one place all ongoing and future projects in the North East for smooth coordination under the umbrella of Act East Forum covering wide range of areas from agriculture and fisheries; development of agro-industries, especially through SMEs; promotion of tourism and cultural exchanges; urban development; healthcare; forestry; and connectivity.

Highlighting the importance of the initiative for the development of the country’s Northeast region, Foreign Secretary Shringla called for personal intervention of Japanese ambassador to India Suzuki Satoshi in adding further momentum to projects like Smart City project in Kohima and JIT Nagarbera.

The Foreign Secretary thanked Ambassador Suzuki for positively considering, besides others, the Guwahati sewerage project as well as the Sikkim Major District Roads project.

The Foreign Secretary also sought the Japanese ambassador’s attention to the pending proposals, which are: Establishment of 400-bedded Teaching Hospital in Kohima, Super Speciality Cancer and Research Centre in Mizoram, strengthening of health systems and excellence of medical education in Assam.

Further, the Regional Emergency Management Training Institute (REMTI) project in Nagaland is pending for very long, he said. “We have already done the necessary groundwork on our side and shared the required information already. We will share any additional information that might be required,” the Foreign Secretary said.

He also talked about India-Japan initiative for strengthening of bamboo value chain in Northeast and promised sharing the latest update about it by the External Affairs Ministry with the Japanese ambassador.

At the meeting, the Foreign Secretary maintained that several projects discussed during the last forum meeting in the areas of connectivity, water supply and sewerage management, power, forestry and capacity building are under implementation and they are progressing smoothly.

He also expressed his happiness that both India and Japan are working on a revised document called the India-Japan Initiative for Sustainable Development of the Northeast Region of India (SDINE).

This document is expected to be finalized by February end and the objective is to keep it ready for the next annual summit between prime ministers of the two countries.

Established in 2017 by Prime Minister Narendra Modi and then Japanese Prime Minister Sinzo Abe, the AEF has witnessed four meetings, where discussion largely focussed on economic development, connectivity and other projects in the Northeast region.