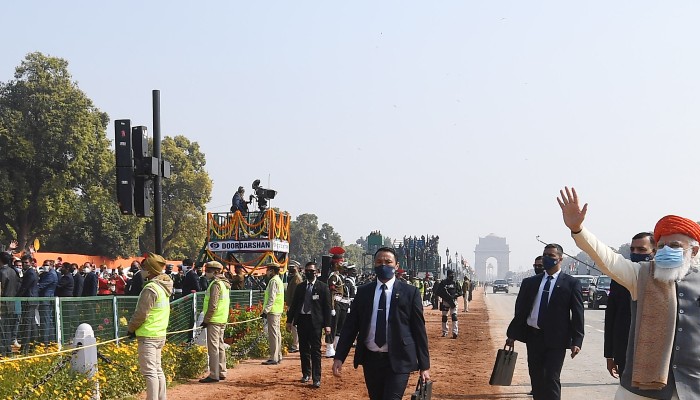 As India celebrated Republic Day, leaders from across the world congratulated the country on completing 72 years as a sovereign republic

Several heads of state and government greeted India on the occasion of its 72nd Republic Day with the US maintaining that bilateral ties remain strong through the democratic ideals the two countries share.

“The US joins India in honouring the day that marks the adoption of its Constitution, which was pivotal in transforming India into the world’s largest democracy,” the US State Department of the South and Central Asia Bureau said in its tweet.

“The US-India relationship remains strong, through the democratic ideals we share,” the US State Department added.

Bangladesh Prime Minister Sheikh Hasina, while extending greetings to India on its Republic Day on Tuesday, said new frontiers of bilateral cooperation and traditional areas of engagement are being opened, even during the difficult times created by the Covid-19 pandemic.

In her letter to Prime Minister Narendra Modi, she said both India and Bangladesh are “working closely to take the relations to a newer height, including through celebration of the birth centenary of our Father of the Nation Bangabandhu Sheikh Mujibur Rahman, 50 years of Bangladesh’s Independence as well as that of diplomatic relations between our two countries.”

While extending greetings to India, Prime Minister Narendra Modi on Republic Day, French President Emanuel Macron on his Facebook account wrote: “On the special occasion, I wish all the best to my friend Prime Minister Narendra Modi and all Indians. In the context of the pandemic, France and India share more than ever—the same challenge, the same fight, the same willingness to face the challenge of the pandemic. We will fight together and we will win together.”

Recalling his visit to India in 2018, French President Macron said, “I have a lot of memory of a trip to your country in Spring 2018. I do remember all our projects together. Our Indo-Pacific ambition, our common projects in a lot of sectors and I do remember the warm welcome of your fellow citizens.”

“Today, as India celebrates Republic Day and the birth of the Constitution that established your nation as the biggest sovereign democracy in the world. I want to offer my sincere greetings, to a country that is very close to my heart,” the British Prime Minister who had to cancel his visit to India to become the Chief Guest at the country’s 72nd Republic Day on account of re-emergence of Covid-19, said.

“I look forward to visiting India later this year, strengthening our friendship, and striving for the quantum leap in our relationship,” he added.

Australian Prime Minister Scott Morrison was one of the first world leaders to extend his greetings on the occasion of India’s Republic Day. Taking to Twitter, he highlighted the strong bond shared between Australia and India. Interestingly, folks in Down Under, celebrate Australia Day today.

“Of course India and Australia share more than our national day. We pursue the same ideals like democracy, freedom, liberty and diversity. And we continue to nurture deep people-to-people ties,” Morrison said through a video message shared on Twitter.

The Maldivian President and the Sri Lankan Prime Minister also extended greetings to India on the occasion of the 72nd Republic Day.