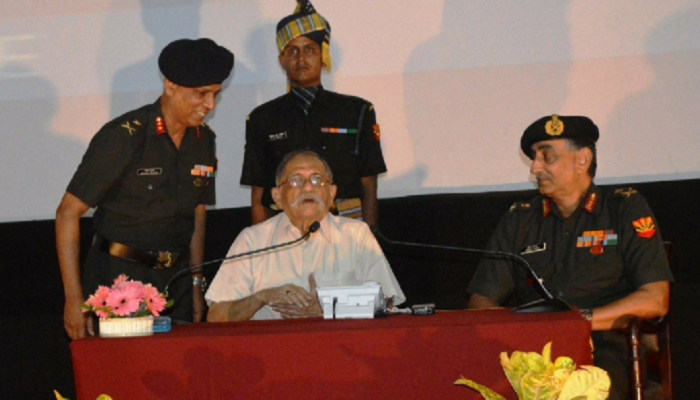 It was the classic case of a people’s war in a people’s setting, says the former Army Chief

India has played a very important role in the freedom struggle of Bangladesh against Pakistan. Following a nine-month war against Pakistan, the country formerly known as East Pakistan, gained independence in December 1971. This year Bangladesh is commemorating the Golden Jubilee of its Liberation. India and Bangladesh are also celebrating the 50th anniversary of their relations, an indivisible bond forged by history, and especially India’s role in the 1971 Liberation struggle. Mihir Bhonsale of India News Network speaks to General (Retd) Shankar Roy Chowdhury, former Chief of Army Staff and former M.P. who is also a 1971 war veteran.

Mihir Bhonsale: How do you see the Bangladesh war of 1971 as a war veteran?

Gen (Retd) Shankar Roy Chowhdhury: I recollect the war of Bangladesh of 1971 as a member of the Mukti Bahini. I was seconded to the Mukti Bahini at that time. The organisation was set up by India. It was a brilliant organisation, and we did an excellent job. I would also state that we must continue to maintain good relationship with the present government i.e., the Awami League government in Bangladesh. Maintaining good relations is a strategic necessity which have been generally very good but had been through ups and downs. It is a purely political task now and it is upon the wisdom of the political class to maintain.

Q: Could you mention any experience of working with Mukti Bahini that you cherish?

A: I cherish the experience of the tremendous enthusiasm among members of the Bahini. They had no doubts about their nationalism whatsoever. Their aim was the liberation of East Pakistan and they were deeply committed towards this aim. But as is usually the case, competing leadership developed in the Mukti Bahini, the latter being an irregular organisation with people from former East Pakistan Rifles, from the East Bengal Regiment which at that time was a regular unit of the Pakistan Army. The Bahini was a complete mixture of people from different sources and it is to their great credit and the political wisdom on our part to have contributed to the growth of a hybrid organisation (in the beginning) which later found its footings under its Bangladesh army officers with support of Indian resources.

Q: Could you tell us about the Vijay Diwas of 1971 as an army officer?

A: On December 16, there was a huge parade in Dhaka after the Indian Army moved there. We were working with the Mukti Bahini and I was sitting under a tree somewhere on the suburbs of Jessore with my associates from the Mukti Bahini. I was in plain clothes. I had tuned in to the radio, which was not working properly, but we had trained our ears to our brethren in the Indian Army and their good campaign, especially the Indian Army’s 16th Parachute Brigade that had played an important role in campaign.

Q: Who were the Multi Bahini associates who were with you at that time?

A: I can recollect two associates of the Mukti Bahini, Khalid Musharraf and Ziaur Rahman. Rahman is the late husband of former Bangladesh Prime Minister Khalida Zia. These people later on spilt-up on various political grounds and there was lot of trouble in Bangladesh, but things seem to have settled down now. I am glad that a contingent from the defence forces of Bangladesh is marching in our Republic Day parade because we were known as the Mitra Bahini i.e., the allied army. We were functioning there as allies. When we were carrying out these tasks, it was essential to give value to the sentiments of our allies and I think, we did a very good job. The Indian Army and all its constituents can give themselves excellent credit for that and the Bangladesh Army.

A: As long as we were in the Mukti Bahini, it was mandatory for us to move in plain clothes, because then war had not been declared. Once, the war was declared, we dug out our uniforms and got back into them. There were other issues as well… had we moved into uniforms, we could have become marked targets for Razakars. The situation at that time was extremely complex and confused. But the big thing is that India won, whether operating through the Mukti Bahini or through the Indian Army. We were both parts of the same force. We had orders to keep harassing the Pakistani Army and cause maximum casualty, the morale break-down which is the essence of the guerrilla warfare, as you know. It is a hard job to stir up a hornet’s nest in the country. The people of Bangladesh were very much in favour of us. So, it was the classic case of a people’s war in a peoples setting.

Q: What was your rank then?

A: I was a Major in the Indian Army. To qualify it, I was a Bengali speaking Major. As a resource which the Army, the Indian Government, and the Ministry of Defence and former Prime Minister Indira Gandhi, who was a moving spirit behind it, had the Bengali speaking officers of the army particularly assigned for this role. We were gathered, together and functioned with our respective Mukti Bahini commands. All the Bengali speaking majors were scooped up at Fort William. When I landed up at Fort William, I was just out of Defence Staff College and as an operations officer, we were high priority in Army. To my amazement, I saw my similarly placed colleagues from North-East, Kashmir and all over the country gathered together and this operation was launched.

Q: How were you communicating with your higher-ups in the command?

A: We were out of communication, but we were communicating by courier. The Bangladeshis operating from inside Bangladesh, coming out and conveying whatever the requirement were inside Bangladesh to keep them going and we used to try and send them the necessary wherewithal so that they could continue operating.

Q: Any incident that you wish to tell us where you fighting with Pakistan military?

A: Yes. Fighting in the sense, we were deployed in the area of the delivering terrain, so what we mainly saw and it stayed out of the way was the Pakistan naval gunboats. The Mukti Bahini created its own inland Navy using Ex-Pakistani Bengali speaking seamen and officers. The Indian Navy trained…we trained underwater demolition teams at ports like Chalna and Mongla. There the Mukti Bahini people that we trained were operating on the land and the Naval fragment that the Navy trained were operating from bases in the rivers. The Mukti Bahini boys were very good swimmers and the Indian Navy did a commendable job.

Q: When did you return to Kolkata (then Calcutta) and what was the mood then?

A: We returned to Calcutta on the day Bangladesh was declared and the Indian Army pulled out of the country. We followed on the tail of all these people.

Q: Have you visited Bangladesh after 1971? Were any honours conferred upon you by the government there?

A: Yes, I have visited Bangladesh, several times. They were very cordial with us. The Bangladesh government wanted to confer orders upon us. But our army regulations rightly so did not permit. Post retirement, we went to Bangladesh on an invitation from Prime Minister Sheikh Hasina in 2014. We participated in a social event of an interaction with us retired Indian Army men who were in the Mukti Bahini and our Bangladesh counterparts. They were very hospitable to us. I was accompanied by my wife and we spent about a week in Bangladesh. I recollect, Col. Wahab, Major Manzoor, Maj Jaleel, all three were Bengali speaking officers of the Pakistan Army who happened to be in East Pakistan during the war purely by chance because they were on leave visiting their homes in Bangladesh. They were all part of the Mukti Bahini. Major Manzoor came out of Pakistan Army from his posting in the Jammu region and he then crossed over into Bangladesh. On the Indian side who attended the function in 2014 were Brigadier Nasim Arthur Alex of the Kumaon Regiment who was my sector commander and Om Prakash Kaushal of the Grenadiers.