The 1971 War which gave birth to Bangladesh 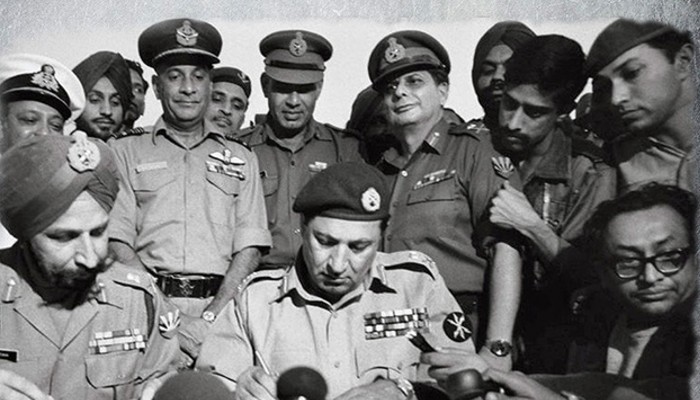 On December 16, 93,000 Pakistani troops raised white flags and surrendered to the Indian Army

This war was a hallmark demonstration of the coordination with the three segments of India’s armed forces, the Army, Navy and Air Force

On the night of March 25, 1971, the Pakistan Army had launched a relentless crackdown on citizens of East Pakistan. It was their own country. Thousands of people were shot, bombed and burned to death in Dacca alone. That is Dhaka, the capital of Bangladesh now.

By July 1971, India the neighbour was saddled with six and a half million refugees fleeing from this pogrom. Over five million of them were in the Indian State of West Bengal. It contained over 400 out of nearly 600 camps in India.

In the dark annals of human cruelty the killings in East Pakistan perhaps rated bloodier than Bosnia and in the same accounts in the same gruesome league as Rwanda.

It was left to India which could not ignore this slaughter any more. For purely humanitarian reasons it had to intervene. The Indian State was facing a trauma in its extreme.

It was necessary to rescue itself from the clutches of a severe emotional and economic burden engulfing its own people. A military campaign was the only plausible solution for this excruciating human problem, and not of its own making, facing the Indian Government.

We now know of the emergence of “Mukti Bahini,” the India supported freedom fighters of Bangladesh perhaps in the month of April 1971 a prelude to the military action to follow on December 4, 1971.

But not before Pakistan launched preemptive aerial strikes on our bases in west of India on December 3, 1971and Pakistan declared war on India--a war which lasted till December 16, 1971, when about 93000 troops of Pakistan Army laid down their arms and surrendered to Indian Forces. Bangladesh thus came into being. This war was a hallmark demonstration of the coordination with the three segments of India’s armed forces, the Army, the Navy and the Air Force.

As an erstwhile member of the Indian Air Force let me confine myself to presenting some archival statistics of the air effort put in by the IAF in achieving the operational objective of neutralizing the enemy’s potential for waging a war.

According to data provided in “Eagles over Bangladesh (Ed Jagan Mohan and Chopra)”, a total of 2002 combat missions were launched by IAF during the 14 days war out of which 1229 missions were in support of the Indian army advancing in East Pakistan whilst 368 sorties were flown for counter air operations. Several varieties of operations were conducted ranging from para-dropping of a Brigade to striking at PAF bases and in this effort IAF lost 16 aircraft whilst PAF losses amounted to 23 aircraft.

I was fortunate to be one of the crews of No. 106 Strategic Reconnaissance Squadron of the Indian Air Force during the 1971 War with Pakistan.

In the annals of the Indian military aviation, the exploits of the squadron largely remained away from the public gaze, primarily due to the secrecy surrounding its activities. It operated the unarmed Canberra PR 7 combat aircraft to gather photo intelligence about strategic targets, a task most essential for planning combat missions. Whilst we were busy on both of our fronts, in east and the west, our work in East Pakistan had commenced much earlier. Some missions over East Pakistan remained deeply etched in my memory. Let me recount them.

For our photo mission on December 8 and 9 in 1971, when we reached the launching airfield in Guwahati, there was hardly any time to refuel. It was critical to reach our first target at Cox Bazar at 1400 hrs to coincide with the action of the Indian Navy. We entered the mission at the topmost speed which the aircraft could safely withstand to maintain time. The machine guzzles fuel in those flying conditions.

We were to enter East Pakistan at Aizawl from the east to align with our photo run. When we were pulling up for the photo run, there was a potent anti-aircraft fire. We then dived again to the ground quite unmindful of the ground fire and proceeded to Chittagong harbour where a similar photo run had to be executed. Short of the airfield, we climbed through thick smoke billowing from the ships which were perhaps struck a little earlier. Ultimately, we were critically low on fuel.

Similarly, the photo mission on December 13, 1971 was truly adventurous. We lost a lot of time in rectifying the cause of fire which had erupted in the battery compartment of the aircraft. We were airborne just to be in time to avail of adequate sunlight whilst we covered the Dacca complex.

There was great pressure and we were required to proceed directly to Delhi. It was already twilight in Dacca and full darkness as we closed in on Delhi. But, most seriously, our ground speed reduced to 1/3rd compared to what it was during the onward journey to Dacca.

It was one of the most noteworthy experiences of westerly jet streams, which are known to have recorded speed up to 180 Kts (over 300 km/hour) in this terrain-induced wind funnel south of the Himalayas. As a result, we arrived at Palam well beyond the planned flight plan and were declared a hostile aircraft in our own country.

The author is a retired Air Commodore. He was awarded the Vayu Sena Medal for gallantry during the 1971 War