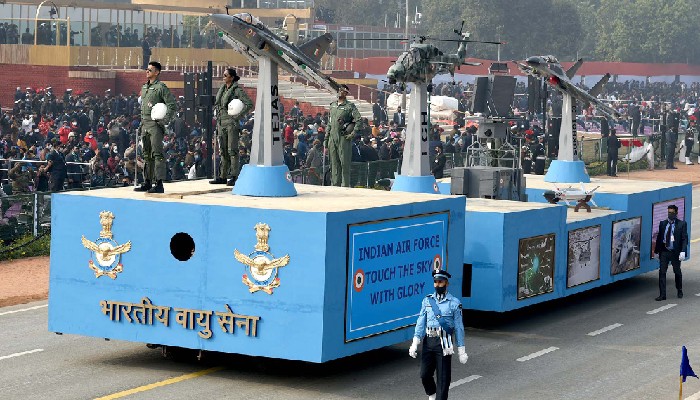 In a first, a 122-member tri-services contingent from Bangladesh will be part of the Republic Day Parade

A display of India’s military prowess, participation by a contingent from Bangladesh and a Vertical Charlie by one of the newly-acquired Rafale fighters will be among the high points of this year’s Republic Day Parade along New Delhi’s Rajpath on Tuesday.

One of the Defence Research and Development Organisation (DRDO) contingent tableaux will depict the Light Combat Aircraft (LCA) - Navy taking off from INS Vikramaditya, the Ministry of Defence said in a statement giving details of the Republic Day Parade programme. The DRDO will also showcase Anti-Tank Guided Missile systems.

The Indian Navy will have tableaux murals depicting the Pakistan Army surrendering in 1971, in addition to a Petya class ship and Operation X undertaken by divers of Indian Navy and Mukti Bahini and some other ships which took part in the 1971 India-Pakistan War.

The Indian Air Force (IAF) will showcase the Mi-17 V5, Chinook and Apache helicopters, in addition to scaled down models of the Light Combat Aircraft, Light Combat Helicopter, Su-30 MK-I aircraft and the Rohini radar system.

Thirty-two tableaux from States & Union Territories, various Ministries/Departments and paramilitary Forces will roll down the Rajpath during the event, showcasing the country’s cultural diversity, social and economic progress will also be on display through tableaux by different states and Union Territories.

Bangladesh Armed Forces contingent to be part of parade

They will carry the legacy of legendary Muktijoddhas of Bangladesh, who fought against oppression and mass atrocities and liberated Bangladesh in 1971, the defence ministry said.

The event will culminate with Rafale aircraft flying at a speed of 900 kilometres per hour carrying out a ‘Vertical Charlie’.

The ceremony will commence with Prime Minister Narendra Modi visiting the National War Memorial to pay tributes to the fallen heroes by laying a wreath.

The National Flag will be unfurled followed by the National Anthem with a 21-gun salute before the parade commences with President Ram Nath Kovind taking the salute.

The parade will include the winners of the nation’s highest gallantry awards, the Param Vir Chakra and the Ashok Chakra.

Exciting Fly Past to be the grand finale

It will be followed by Garuda formation consisting of one C-17 Globemaster with two MiG-29s & two Su-30 MKI aircraft in ‘Vic’ formation. The C-17 is a heavy lift; long range strategic airlift aircraft. Induction of C-17 aircraft has changed the dynamics of strategic mobility and reach of the Air Force.

The next formation will be one of the awaited attractions of the event, one Rafale with two Jaguar deep penetration strike aircraft and two MiG-29 Air Superiority Fighters in ‘Vic’ formation at the height of 300 metre and a speed of 780 kilometre per hour.

The penultimate culmination of the parade will be a single Rafale aircraft flying at a speed of 900 kilometre per hour carrying out a ‘Vertical Charlie’, the Ministry of Defence said.