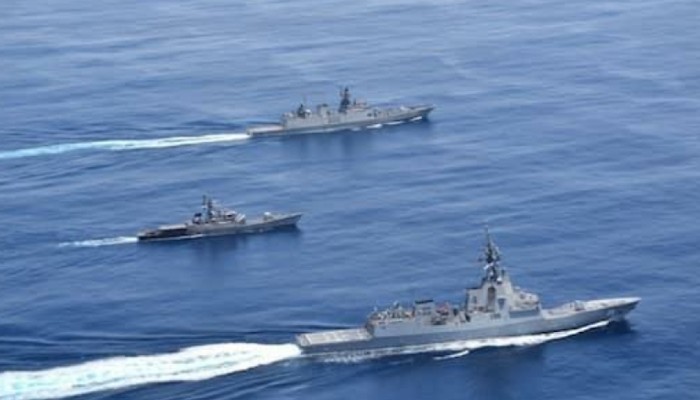 It will include air and maritime strikes, air defense, submarine and landing operations

The Indian armed forces will conduct a large-scale joint military exercise ‘Exercise Kavach’ involving assets of the Indian Army, Indian Navy, Indian Air Force, and the Indian Coast guard under the aegis of the Andaman and Nicobar Command (ANC) next week.

“The exercise involves the synergized application of maritime surveillance assets, coordinated air and maritime strikes, air defense, submarine and landing operations,” said the Ministry of Defence in a statement.

It will involve the participation and deployment of elements of Amphibious Brigade along with supporting forces including Special Forces of Navy, Armor/Mechanized components, Naval Ships comprising Destroyers, ASW Corvettes and Landing Ships with ship-borne helicopters of Eastern Naval Command and ANC, Jaguar Maritime Strike and Transport aircraft from Indian Air Force and assets of Coast Guard.

Exercise Kavach is being conducted at a time when India and China are locked in a border standoff in the eastern Ladakh theatre and the Indian Navy has stepped up surveillance in the Indian Ocean Region (IOR) to keep tabs on China’s moves to expand its footprint in the strategic waters.

The ISR exercise will validate the capabilities of intelligence gathering from space, air, land, and sea-based assets/ sensors, its analysis, and sharing to achieve battlefield transparency for quick decision making at different stages of operations.

The waters in which the exercise is being conducted hold strategic value for India, particularly since China is trying to open multiple routes to the Indian Ocean to overcome what has come to be known as the Malacca Dilemma.

According to some estimates, a significant volume (more than 80%) of China’s oil imports passes through the strait which connects the Indian Ocean and the South China Sea. The Malacca Strait is about 350km from the Andaman and Nicobar Islands.

“The joint force would execute multi-domain, high-intensity offensive and defensive maneuvers in the Andaman Sea and Bay of Bengal and carry out amphibious landing operations, air landed operation, helicopters-borne insertion of Special Forces from sea culminating in tactical follow-on operations on land,” the statement said.