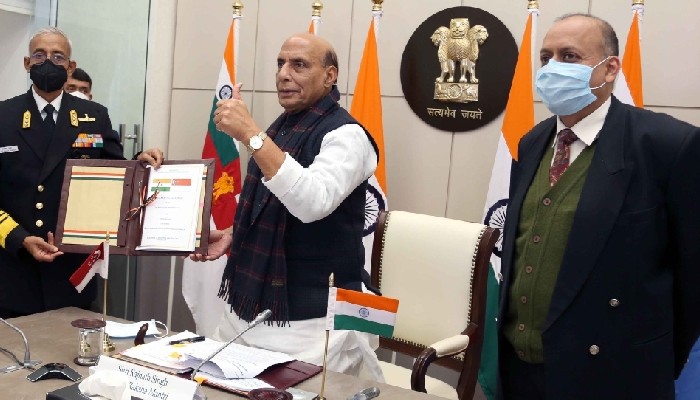 India and Singapore held the fifth Defence Ministers’ Dialogue virtually on Wednesday and discussed continuing the substantial increase in bilateral cooperation and defense partnership over the years.

During the meeting, Defence Minister Rajnath Singh and his Singapore counterpart Ng Eng Hen expressed satisfaction at the progress of ongoing defense cooperation engagements between the two countries despite limitations imposed by the ongoing COVID-19 pandemic, said an official statement.

Both Ministers signed Implementing Agreement on Submarine Rescue Support and Cooperation between the two Navies.

The Implementing Agreement on Submarine Rescue Support and Cooperation between the Indian Navy and Republic of Singapore Navy was signed today at the 5th India-Singapore Defence Ministers’ Dialogue, held via video conferencing facility. pic.twitter.com/d2w7NiWUPy

According to the Defence Ministry, the ministers also conveyed their support towards the early conclusion of agreements to facilitate the conduct of live firings and to establish reciprocal arrangements for the cross-attendance of military courses.

Further, both sides welcomed initiatives to expand bilateral defense cooperation including the implementing agreement on Humanitarian Assistance and Disaster Relief (HADR) cooperation in August 2020 for the two Armed Forces to have closer operational collaboration in response to disasters and capacity-building activities of mutual interest. The cyber agencies of both armed forces have also stepped up engagements.

Both Ministers exchanged views on the impact of the global COVID-19 pandemic on the defense and security engagements, including the best practices adopted by their Armed Forces.

They noted the commitment of their senior officials in sustaining the momentum of annual dialogues during the ongoing pandemic through virtual meetings. This has kept bilateral defense cooperation on a positive trajectory and laid the foundations for further cooperation in 2021.

After the meeting, Singh took to Twitter and said, “Had a productive meeting with Singapore’s Defence Minister, Dr. Ng Eng Hen. India is fortunate to a have defense partner like Singapore. Today’s interaction will benefit both countries on many bilateral issues that are being pursued to further strengthen our special relationship.”

Ng Eng Hen reciprocated the compliments and exchanged views on the role of the Armed Forces in the whole of government's approach towards control of the pandemic.

(1/2) At the 5th India-Singapore Defence Ministers’ Dialogue today, @rajnathsingh and I agreed that building strategic trust, emphasis on rule of law, dispute resolution through peaceful means, and engagement and co-operation are cornerstones in ensuring regional stability. ???????????????? pic.twitter.com/xgeAFwEciL

During the meeting, Singh reaffirmed ASEAN centrality in the regional security architecture and pledged India’s support to all endeavors of the ASEAN Defence Ministers' Meeting (ADMM)-Plus while Ng expressed support for India’s upcoming co-chairmanship of the ADMM-Plus Experts’ Working Group on HADR.

Both Ministers were committed to further enhance bilateral defense ties between India and Singapore and supported multilateral initiatives to promote lasting peace and stability in the region.