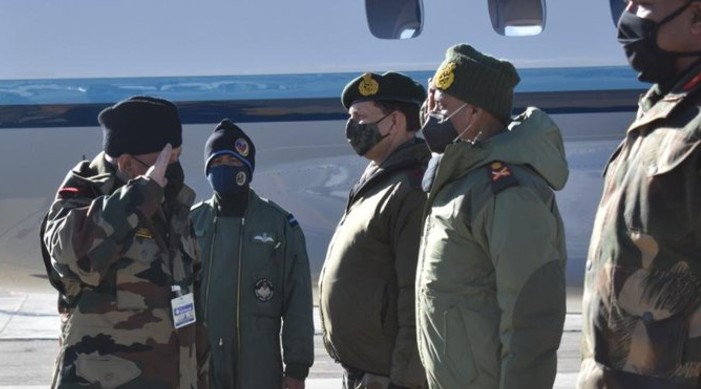 Chief of Defence Staff Gen Bipin Rawat carried out a thorough review of the country’s deployment of ground forces and air assets in high-altitude locations in eastern Ladakh amid the eight-month-long border standoff with China in the region.

Earlier, he visited Dibang Valley, Lohit sector and Subansiri valley near the Line of Actual Control (Lac) in Arunachal Pradesh.

Gen Rawat on a visit to Ladakh reviewed the overall security scenario and the country's military preparedness with the ground commanders at the Leh-based 14 Corps, popularly known as Fire and Fury Corps.

Gen Rawat was given a detailed overview of India's deployment in the region by Lt Gen PGK Menon, the commander of the 14 Corps.

The CDS has been a part of the strategy to enhance India's military prowess in view of the Ladakh standoff.

They both held discussions on operational matters with senior Indian Army and IAF Commanders at the air force station in Leh.

"The Chief of Air Staff conveyed his deep appreciation for the exceptionally high levels of morale and dedication with which all personnel continue to maintain operational preparedness despite the harsh weather and an inhospitable terrain", said the IAF about ACM Bhadauria's interaction with the troops on the ground.

The Army and the IAF have been maintaining a high state of operational readiness along the nearly 3,500-km Line of Actual Control (LAC) with China in view of the border stand-off.

Considering diplomatic talks between the two sides have not yielded any concrete outcome to resolve the military face off so far, nearly 50,000 troops of the Indian Army have been deployed in various locations in eastern Ladakh.

According to sources, China has also deployed an equal number of troops.

The last round of military talks took place on November 6 during which both sides discussed disengagement of troops from specific friction points.

Violent clashes between the armies of India and China resulted in the death of 20 Indian soldiers and unaccounted number PLA troops in the Galwan Valley on June 15.