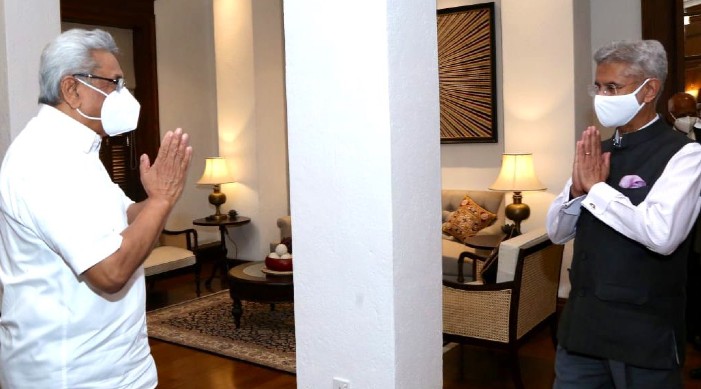 The visit has taken place when Sri Lanka, India are faced with challenges of economic recovery and containment of the pandemic

Indian External Affairs Minister Dr. S Jaishankar wrapped up his first ever bilateral visit in 2021 to Sri Lanka on Thursday. The visit, undertaken at the invitation of the Sri Lankan side, remained overdue for quite some time due to the outbreak of the Covid- 19 pandemic.

Dr. Jaishankar himself mentioned it in his remarks to the media at the joint press conference with his Sri Lankan counterpart Dinesh Gunawardane on January 6.

The visit has taken place at the time when both Sri Lanka and India are faced with the challenge of economic recovery and the containment of the pandemic.

In its engagement with Sri Lanka in recent years, India has granted assistance for numerous projects including the 1990 island-wide Suwaseriya ambulance service, a project that has already brought dividends to people here, particularly at the time of the corona outbreak.

Others include construction of a 150-bed hospital in Dickoya, near Hatton in the Central Province, which Indian Prime Minister Narendra Modi dedicated to the people of Sri Lanka during his visit in May 2017, the Jaffna cultural centre which is under construction and the Indian housing project. A new US$ 100 million line of credit for solar energy has been approved recently.

Despite such overtures, the full potential of bilateral relations is not yet realized due to some contentious projects such as the development of the East Container Terminal of the Colombo port, renovation of the oil tank farm in Trincomalee in eastern Sri Lanka.

Initiatives were taken regarding these projects mooted during the time of the previous government but they did not take off the ground due to local political sensitivities involved.

These projects are now under discussion under the present government led by President Gotabaya Rajapaksa who ascended to office after winning the presidential elections on November 16, 2019.

Besides, the fisheries issue, triggered over the fact that fishermen from South India cross the International Maritime Boundary Line and poach in Sri Lankan waters, has become a persistent irritant though the two sides are in touch through the diplomatic issue to work out a sustainable solution.

Be that as it may, President Rajapaksa, now in his second year into office, is keen to maintain healthy, robust mutually beneficial relations with India. Sri Lanka is India’s closest maritime neighbour, and located in a region where geopolitical rivalry among superpowers- China, Japan, India and the United States- plays out.

Sri Lanka is compelled to walk tight diplomatic rope in dealing with all these countries, and more so with India and China. China is also a key development and investment partner of Sri Lanka, having executed strategically important projects such as ports and airports.

Obviously, India does not like Sri Lanka to be drawn overly into the sphere of Chinese influence. As such, India’s constant engagement with Sri Lanka at the leadership level makes sense. Sri Lanka has also understood the relevance and significance of India for a stable, prosperous future. That is why Sri Lanka articulated an ‘India First’ approach as far as security is concerned.

“As far as security is concerned, our number one priority is India,” Sri Lankan Foreign Secretary Jayanath Colombage told this columnist in an interview last year.

It means Sri Lanka will not undertake anything with security implications for India. The Indian leaders, on several occasions, commended Sri Lanka’s position. The diplomatic field has now been ploughed to sow the seeds of goodwill and realization of bilateral goals.

Alongside, the pandemic has created new openings to take relationships to the next level. Lalith Weeratunga, the Principal Advisor to President Rajapaksa, told this columnist that Sri Lanka would seek a bilateral arrangement with India to obtain a vaccine being manufactured there. He said such a move would help boost bilateral relations between the two countries.

Sri Lanka’s interest was communicated to Dr. Jaishankar by President Rajapaksa during bilateral discussions. The Indian External Affairs Minister responded positively to this request. Sri Lanka received over 26 tonnes of medical aid during the months of April to June from India.

Dr. Jaishsanka’s visit is likely to set the stage for the expedition of bilateral projects, while sorting out grey areas. Apparently, India is keen to see that the agreement for the development of the East Container Terminal is sealed as early as possible. India looks flexible to the new investment proposal by the Sri Lankan side.

In its post- Covid-19 context, Sri Lanka is in urgent need of hard currency for economic revival and job creation. Accordingly, Sri Lanka is looking forward to accelerating the projects that are in the pipelines. Sri Lanka will prefer India to come up with financial support for speedy execution of the projects.

In the international sphere, there is concern that Sri Lanka does not ensure a level playing field. The allegation is that China has secured a disproportionately large presence in the country in terms of foreign direct investments.

May be, in a move to allay such concerns, President Rajapaksa’s government invited investments from different countries. He made the same request from US Secretary of State Mike Pompeo during his visit to the country last year.

The Sri Lankan government also expects India to come up with investment proposals and realize them on the ground here. It appeared to have been discussed at the bilateral meetings during Dr. Jaishankar’s brief but important visit.

“There are many proposals under discussion, including in infrastructure, energy, connectivity, etc. Their early implementation is obviously in mutual interest and would definitely accelerate Sri Lanka’s economic recovery. Let me stress that Indian business is strongly interested in investing in Sri Lanka. We have discussed some important opportunities including in special zones for pharmaceutical manufacturing as also in tourism. I will ensure an early follow-up,” Dr. Jaishankar said at the joint press conference.

Sri Lanka is interested in seeking Indian assistance for improvement in agriculture and livestock areas and the development of the vocational training sector. These are non-controversial areas, unlike the East Container Terminal and the Trincomalee Oil Tank Farm.

All in all, the Indian External Affairs Minister’s visit will lay the groundwork for fast-tracking of bilateral ties including the meaningful execution of projects.


**Kelum Bandara is a Sri Lankan journalist with interest in current, diplomatic and political affairs; views expressed are his personal.