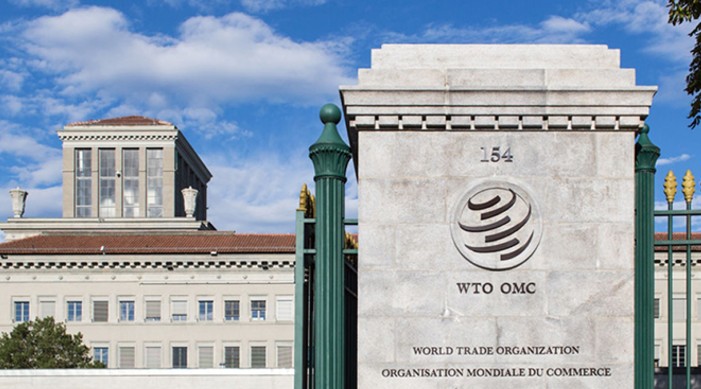 India has informed the World Trade Organization that is committed to ensuring "equitable and affordable access to vaccines and COVID-treatments for all".

Delivering his opening remarks after the World Trade Organization (WTO) began India’s seventh Trade Policy Review (TPR) on Wednesday, Union Commerce Secretary Anup Wadhawan highlighted that, in order to deal with the immediate fall-out of the COVID-19 pandemic, India had advocated a short-term package of effective measures at the WTO.

This includes a temporary waiver of certain TRIPS provisions to increase manufacturing capacity and ensure timely and affordable availability of new diagnostics, therapeutics and vaccines for COVID-19

The review is part of the global body's monitoring function which involves a comprehensive peer-review of a member country's national trade policies. India’s last TPR took place in 2015.

Wadhawan, who is heading India’s official delegation for the TPR, pointed out that the review was taking place at a time when the world is witnessing an unprecedented health and economic crisis.

According to an official statement issued by the Ministry of Commerce and Industry, Wadhawan highlighted the far-reaching efforts made by India to effectively address the health and economic challenges posed by the Covid-19 pandemic, including the Aatmanirbhar Bharat initiative.

The Commerce Secretary also highlighted the need for a permanent solution for Public Stockholding (PSH) for food security purposes to address food security concern; and a multilateral initiative that provides for easier access to medical services under mode-4 to facilitate easier cross-border movement of health care professionals.

Delivering his opening remarks, Wadhawan emphasized that in the last five years, since India’s previous TPR, the government has worked diligently to reform and transform the entire economic eco-system to meet the socio-economic aspirations of a billion plus Indians.

The introduction of the Goods and Services Tax (GST), the Insolvency and Bankruptcy Code (IBC), path-breaking reforms in the labour sector, an enabling and investor friendly FDI Policy, and various national programmes like Make in India, Digital India, Startup India and Skill India to bring about rapid transformation across sectors in our manufacturing environment, were among the steps taken in this direction.

The improvement in the economic and business environment, on account of the wide-ranging reforms, has enabled India to better its position in the World Bank’s Doing Business ranking from 142 in 2015 to 63 in 2019.

According to the official statement, this improvement is also endorsed by investors who continue to view India as a desirable investment destination even during the testing time of the pandemic, with FDI inflow rising by more than 10 per cent year-on-year to reach USD 40 billion in the first six months of 2020-21. In 2019-20, India received the highest ever FDI inflow of USD 74.39 billion.

A comprehensive report issued by the WTO Secretariat on the occasion, chronicling all major trade and economic initiatives that India took over the last five years, acknowledged India’s strong economic growth at 7.4% during the period under review and made a positive note of India’s reform efforts during this period.

"The Report noted that strong economic growth led to an improvement in socio-economic indicators, such as per-capita income and life expectancy in India. The Secretariat report also commended India for liberalizing its FDI policy, ratifying the Trade Facilitation Agreement and implementing several trade-facilitation measures during the period under review," the official statement said.

More than 50 WTO Members who delivered statements on the occasion, commended India for its strong and resilient economic growth and for the vast improvement in its ease of doing business, as acknowledged by the World Bank.

The members also mentioned remarkable steps taken by India to improve trade and economic policies in a more inclusive and sustainable manner, with several applauding India’s leadership role in the global efforts against the Covid-19 pandemic, and acknowledging India’s position as the ‘pharmacy of the world’.