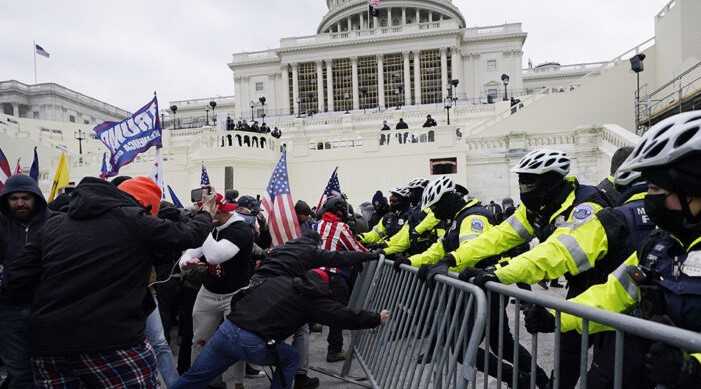 Protestors trying to forcibly remove barricade at the Capitol Hill

Prime Minister Narendra Modi on Thursday expressed his unhappiness over the rioting and violence allegedly by supporters of Donald Trump who swarmed inside the Capitol building in Washington DC when a session of Congress was on to certify Joe Biden’s election win on Wednesday.

“Distressed to see news about rioting and violence in Washington DC. Orderly and peaceful transfer of power must continue. The democratic process can’t be allowed to be subverted through unlawful protest,” Prime Minister Modi said in his tweet.

As per various media reports, to quell rioting, police used teargas and also resorted to shooting, resulting in the death of four people on the US Capitol grounds. Police also arrested 52 people in their four hour operation against rioters.

The US Capitol had to be locked down with lawmakers inside after protesters tore down metal barricades at the bottom of the Capitol’s steps and were met by officers in riot gear.

Some tried to push past the officers, who held shields, and the police could be seen firing pepper spray into the crowd to keep them back, even as the crowd shouted, “traitors”. The violence soon moved inside the Capitol building, with reports of firing at the premises.

The chaos descended at the Capitol a day after Democrats were projected to win two Senate seats in runoffs in Georgia -- handing the party full control of Congress and dramatically increasing Joe Biden's ability to pass legislation, starting with new Covid-19 relief.

Historians said it was the first time that the Capitol had been taken over since 1814 when the British burned it during the War of 1812.

In the meanwhile, US President Donald Trump has said there will be a peaceful transition: “Even though I totally disagree with the outcome of the election, and the facts bear me out, nevertheless there will be an orderly transition on January 20th. I have always said we would continue our fight to ensure that only legal votes were counted. While this represents the end of the greatest first term in presidential history, it’s only the beginning of our fight to Make America Great Again!”