FS Shringla blames “legacy of colonialism” for instability in Africa 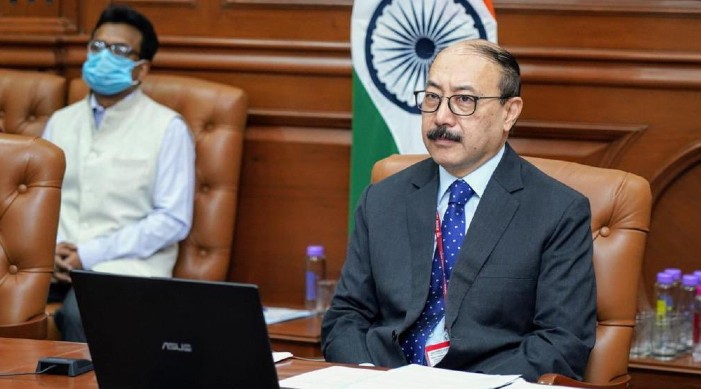 There is a strong correlation of the State’s fragility with poverty, terrorism, radicalism and violent extremism and pandemics, said FS Shringla

Participating at the UNSC open debate on ‘challenges of maintaining peace and security in fragile contexts’, Foreign Secretary Harsh Vardhan Shringla has blamed “legacy of colonialism” for the ongoing instabilities in the African continent.

“Let us not fail to acknowledge that the legacy of colonialism constitutes the foundational basis of the current instabilities that plague the African continent,” Foreign Secretary said in his remarks at the UNSC debate.

He said even as democracy is undoubtedly gaining ground in Africa, especially through peaceful transfers of power, African countries, particularly in the Sahel, Central Africa and the Horn of Africa continue to face complex challenges.

The Security Council should remain respectful of the regional approach adopted by countries, in collaboration with regional organizations to address common challenges.

He emphasized that the African Union has a leadership role to play in consolidating peace and post conflict reconstruction in Africa.

He also said that there is need to ensure that the UN and its presence on the ground, its Peacekeeping Operations and Special Political Missions, are sufficiently mandated and resourced to implement a comprehensive understanding of peace and security.

India has contributed significantly to UN peacekeeping in Africa for six decades and it has seen that peacekeeping missions are struggling to implement ambitious mandates.

“Peacekeeping missions need to have a clear and well thought out exit strategy,” he added.

Highlighting that the African continent does not even have a single voice amongst the permanent membership of the United Nations Security Council to defend its own interests, the Foreign Secretary said this historical anomaly needs to be corrected by supporting the Ezulwini consensus.

India has, he said, reached out to 43 African countries; executed 189 developmental projects in 37 African countries. “Around 77 projects are under execution with a total outlay of US$ 12.86 bn. It has committed US$ 1.7 billion as soft loans for solar projects, including in Africa, as its commitment to the International Solar Alliance. India has offered 50,000 scholarships to African students,” Foreign Secretary Harsh Vardhan Shringla said.

As for assistance to the continent, he said, “India has supplied critical medicines to several countries in Africa to help them fight the COVID-19 pandemic. Premier Indian institutions and hospitals have been linked to 16 African countries to offer tele-education and tele-medicine services through the e-Vidya Bharati and e-Arogya Bharati portals.”

“India has been the first developing country to provide duty free, quota free market access to LDCs which has been available over the years to 33 countries in Africa. India is Africa’s third-largest export destination. Indian companies have invested over US$ 54 billion in Africa,” he said.

India welcomes the evolution and rise of Africa as a key factor in the contemporary world and is committed to supporting African countries in this endeavor, as per African priorities and without conditionalities, the Foreign Secretary added.