Amid standoff with China, CDS Rawat reviews situation along LAC in Arunachal Pradesh 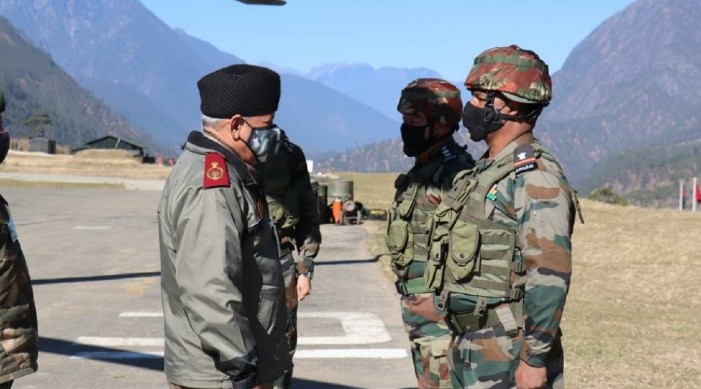 Amid the ongoing border tension between India and China at the Line of Actual Control (LAC), Chief of Defence Staff (CDS) General Bipin Rawat on Sunday concluded a two-day visit to forward areas near the LAC in Arunachal Pradesh.

During his extensive visit to remote forwards posts and airbases in the eastern sector, he reviewed the operational preparedness of the armed forces. They are deployed in adequate numbers since the stand-offs with China started in May.

On the second day of his visit, Rawat interacted with the Army and Indo-Tibetan Border Police (ITBP) personnel deployed along the Subansiri valley in Arunachal Pradesh.

The CDS complimented soldiers for adopting innovative surveillance measures for locally developed technology. He also lauded the defense preparedness of the personnel to face any challenge. Rawat said he was satisfied by the high morale and motivation of all ranks, according to the Indian Army.


#CDS complimented soldiers for adopting innovative measures for #surveillance through locally developed #technology & the defence preparedness to face any challenge.(2/3)


On Saturday, the CDS visited forward air bases in the eastern sector besides the forward posts in Dibang valley and Lohit sector. All these posts in the forward are air-maintained.

Complimenting the soldiers for their readiness, Rawat said only the Indian soldiers could remain vigilant under such challenging situations. They were also willing to go beyond the call of duty to safeguard the borders, the CDS said.


#CDS said that only Indian soldiers could remain vigilant under such #challenging situations, ever willing to go well beyond the call of duty to safeguard the borders. Nothing can deter the Indian Armed Forces on remaining steadfast in their call for duty. (3/3) pic.twitter.com/PkWiYFLBNS


He exhorted all ranks to continue working with the same zeal and enthusiasm. The tour marked one year of his tenure as the newly created post of the CDS.

More than one lakh troops from India and China are facing each other at the 1,700 km long LAC in Ladakh. Not willing to take any chances, India has ramped its military efforts all along the 400 km long LAC stretching from Ladakh in the west to Arunachal Pradesh in the east.

The two countries have held several rounds of military and diplomatic levels partly to break the logjam at the border but have failed.