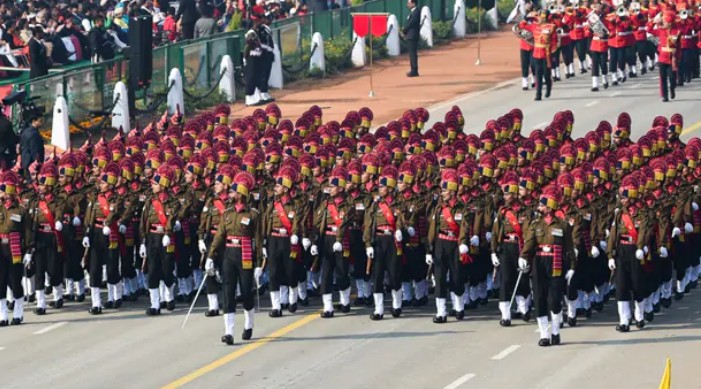 At a time when New Delhi and Dhaka are celebrating the golden jubilee of the birth of Bangladesh, a marching contingent of Bangladesh Army comprising 96 soldiers has been invited to take part in this year’s Republic Day Parade.

This would only be the second time when any foreign country’s troops have been invited to take part in this biggest ceremonial event at Rajpath. Earlier, it was in 2016 when a contingent of French 130 soldiers had marched down Rajpath. Then French President, Francois Hollande had witnessed the parade as the chief guest that year.

The Bangladeshi contingent of 96 soldiers will carry their BD-08 rifles -- a licence-produced variant of the Chinese Type 81 7.62mm assault weapon. Such assault rifles are being produced by the Bangladesh Ordnance Factories, manufacturing more than 10,000 such rifles every year.

As per Hindustan Times, this year’s Parade will be a little shorter and will thus comprise of not more than 25,000 spectators. Keeping in mind the threats posed by deadly coronavirus, there has been a change in the participation of the military squad.

This year’s squad would only comprise 96 participants as compared to 144 and instead of traditional square formation the marching contingent will be seen in a rectangular formation in order to maintain a safest distance amongst the troops. The shortened route of the parade will see it end at the National Stadium instead of the Red Fort.