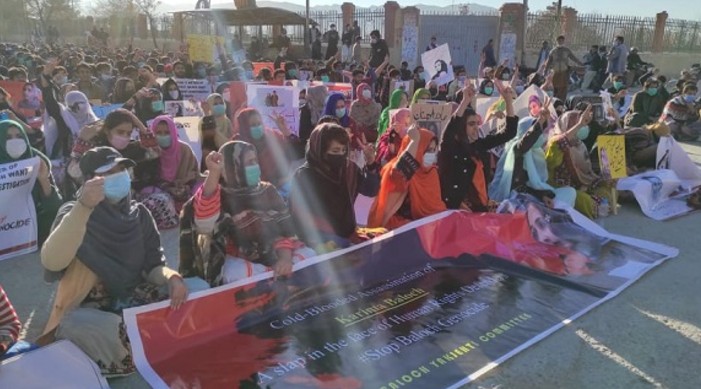 BSC, a non-political group, says the ISI and the Pakistan Army are running a vicious campaign against peaceful protestors in Pakistan

Pakistani security forces and intelligence agencies have been accused by the Baloch Solidarity Committee of intimidation and harassment of the people protesting in Pakistan against the mysterious death of Karima Baloch in Toronto, Canada.

The BSC, a non-political group which is also known as Baloch Yakjehti Committee (BYC) said in a statement on Saturday that people across Balochistan are protesting against the murder of Karima Baloch as it is not a trivial incident for the Baloch.

The BSC said whole Balochistan has turned into a protesting ground for people seeking justice for Karima Baloch, an activist who was vocal against the Pakistan Army and the ISI for their involvement in the extra-judicial killings, abductions and torture of Baloch community people in Pakistan. But despite their peaceful protests, the Pakistani intelligence agencies and security forces are running a vicious campaign against them, the group said.

The BSC was for formed to raise the voice of Baloch, especially after a string of killings, disappearances, rapes and torture of residents of Balochistan by Pakistani security forces and Pakistan army-backed criminal squads.

In the last few days, the BSC has organised peaceful demonstrations in all major cities of Balochistan including Karachi, Dera Ghazi Khan and Quetta – the capital of Balochistan. They have announced several other protests in coming days and weeks to demand justice for Karima Baloch.

The non-political Baloch group said people from Dera Bugti in Balochistan had been beaten up by pro-army death squads for posting pictures of Karima on social media. It said people’s mobiles are snatched away by Pakistani security forces, yet “we have directed people to focus on their peaceful rallies and demonstrations which are our basic rights,” the BSC said.

It also said that a large number of political activists and members of student organisations have reported missing and thousands of mutilated bodies of Baloch people are dumped. The situation is worsening day by day in Balochistan.