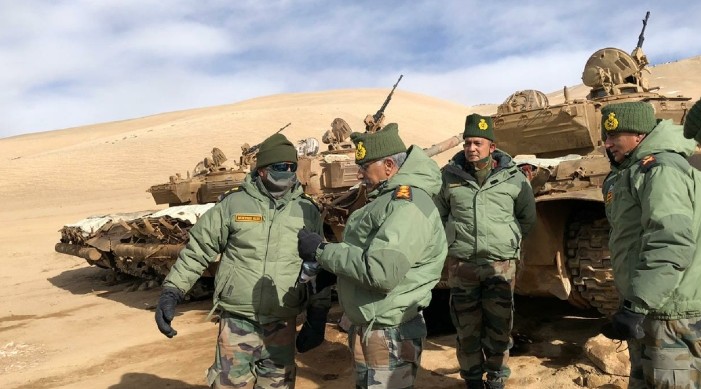 General MM Naravane, who was on a one-day visit, was briefed by the GOC of 14 Corps and other local commanders

As tension continues between India and China, Indian Army Chief General MM Naravane on Wednesday arrived in Leh to visit the Fire and Fury Corps (14 Corps) to review the situation in the forward areas along the Line of Actual Control (LAC).

The Chief of Army Staff (COAS) was received by LT Gen Menon, GOC Fire and Fury Corps, and other Army officers at an airbase in Leh.

“General MM Naravane visited forward areas of Fire and Fury Corps including Rechin La and undertook a first-hand assessment of the situation along the LAC. He was briefed by the GOC of 14 Corps and other local commanders on the operational preparedness of our forces,” the Indian Army said in a tweet.

Gen Naravane undertook on the spot inspection of the state of the habitat of troops on the forward line of defenses at RechinLa. He also appreciated the efforts made by the formation to make the troops comfortable along the LAC, the Indian Army said.

He also visited forward base Tara and interacted with the local commanders and troops. He appreciated their high morale and state of readiness.


General MM Naravane #COAS visited forward base #Tara and interacted with the local commanders and troops. He appreciated their high morale and state of readiness. #IndianArmy#NationFirst pic.twitter.com/Yr4GTE5Q11


While interacting with the troops deployed in forwarding areas, the Army chief exhorted all ranks to continue working with the same zeal and enthusiasm. General Naravane also distributed sweets and cakes on the eve of Christmas.


General MM Naravane #COAS interacted with the troops deployed in forward areas and exhorted all ranks to continue working with same zeal and enthusiasm. #COAS also distributed sweets and #cakes on the eve of #Christmas. #CelebratingFestivalsTogether#IndianArmy pic.twitter.com/Fq22qqIqn3


India and China have been engaged in a longstanding border standoff since May this year. The situation took a turn for the worse after a violent faceoff on June 15 led to 20 Indian soldiers being killed in action. The Chinese side also suffered a large number of casualties but it has never revealed a figure.

Both sides have held a series of diplomatic talks since then to de-escalate tension, both at the diplomatic and military levels.

The last round of diplomatic talks on the standoff in the Ladakh sector of the LAC was held on December 18, after a gap of more than two months, though there were no reports of an immediate breakthrough.