US confers ‘Legion of Merit’ award on PM Modi 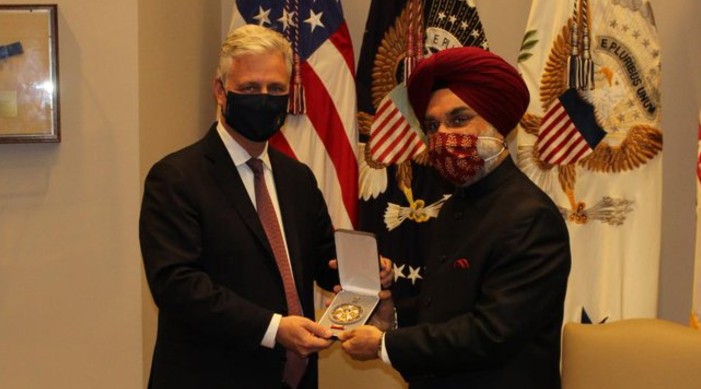 The award was received on behalf of Prime Minister Modi by the Ambassador of India to the US, Taranjit Singh Sandhu

Prime Minister Narendra Modi has been conferred the highest decoration of the US, ‘The Legion of Merit’ by American President Donald Trump “in recognition of his steadfast leadership and vision for India’s emergence as a global power.”

Conferred by the US President on December21, the award is also in recognition of Prime Minister Modi’s exemplary contribution in the advancement of the India-US strategic partnership and promoting global peace and prosperity.

The award was received on behalf of Prime Minister Modi by the Ambassador of India to the US, Taranjit Singh Sandhu.

The Legion of Merit, Degree Chief Commander, is a rarely-awarded, prestigious decoration that can only be bestowed by the President, typically to Heads of state or Heads of Government of other countries.

On 18 September 2020, after a very long gap, President Donald J. Trump awarded the Legion of Merit, Degree Chief Commander, to His Highness Sheikh Sabah Al-Ahmed Al-Jaber Al-Sabah, Amir of the State of Kuwait (it was last awarded in 1991).

The Legion of Merit, Degree Chief Commander is a domed five-pointed American white star plaque of heraldic form bordered in purplish-red enamel 215/16 inches circumscribing diameter with 13 white stars on a blue field emerging from a circle of clouds; backing the star, a laurel wreath with pierced, crossed arrows pointing outward between each arm of the star and the wreath. The reverse is engraved with the words “United States of America.”

The citation with the award states the following: