Northeast is a gateway to East and Southeast Asia: FS Shringla 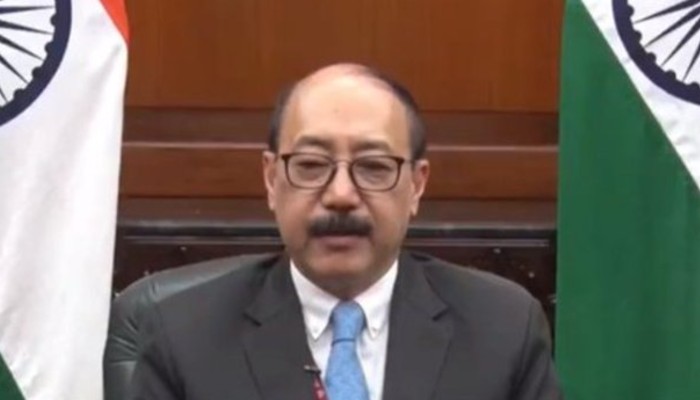 Speaking at the inaugural session of the 8th edition of the North East Festival, Foreign Secretary Harsh Vardhan Shringla on Saturday said the government is constantly working towards capturing the three Cs – Connectivity, Commerce, and Cultural Commonalities in the region.

“At one level, we work bilaterally with our partners with a full range of diplomatic tools. At another level we work through multilateral and plurilateral initiatives such as BIMSTEC and BBIN or Bangladesh- Bhutan-India-Nepal grouping,” he said.

Speaking about the external projects complementing the many initiatives undertaken by the government to improve the railways in the North East, he mentioned the recent inauguration of the rail link between Haldibari in West Bengal and Chilahati in Bangladesh during the virtual summit between Prime Minister Narendra Modi and his Bangladeshi counterpart Sheikh Hasina.

This link can revive the old Siliguri-Sealdah rail route through Bangladesh, taken by the Darjeeling Mail, he said.

“The sixth pre-1965 rail link (Kulaura-Shahbazpur), work on which is underway, will revive the railway connectivity between Karimganj in Assam and Sylhet in Bangladesh. A railway that links Akhaura in Bangladesh to Agartala is under construction and will be ready by 2022 when India will commemorate the 75th anniversary of its independence. Passenger trains such as Maitree and Bandhan Express link India and Bangladesh,” he added.

The Foreign Secretary further said that rivers have played an important role in connecting the people and business in the region encompassing our North East and the neighboring countries.

“This region was served by our common rivers, particularly Brahmaputra and Barak-Surma, which were used extensively for facilitating trade and commerce, and people-to-people contact. Recognizing this, considerable efforts have been made in recent years to augment inland waterways connectivity between the North East and Bangladesh,” he said.

“Another example of our focus on enhancing usage of inland waterways was the movement through this mode of first goods consignment from Bhutan to Bangladesh through India via Dhubri inland port last year,” he added.

Talking about the road transportation links, he said, “Indian and Bangladesh nationals can move by bus between Shillong and Dhaka and between Agartala and Kolkata via Dhaka. Goods and people move by road between the two countries through a network of Land Customs Stations and Integrated Check Posts.”

He also talked about increasing air connectivity in the Northeast.

“Direct flight connections between Guwahati and Bangkok and Guwahati and Dhaka have been initiated. International flights appear to have been suspended due to COVID-19 but I am sure that they will be revived at the earliest possible,” he said.

Speaking about the coordination in the energy sector, he said, “India and Bangladesh are working on building an India-Bangladesh Friendship Pipeline. Hydrocarbons from refineries in Assam can flow through this pipeline into Bangladesh. LPG now reaches Tripura through Bangladesh entailing lower transportation costs.”

In line with the neighborhood and Northeast, he said Myanmar has a particularly important geographical location. “We have therefore accorded high priority to projects that build regional connectivity with Myanmar. Our flagship projects include the Kaladan Multimodal Transit Transport Project and the Trilateral Highway Project connecting the North East with South East Asia with direct connectivity to Myanmar and Thailand,” he said. The projects, he said, will provide land connectivity to the region.

Not only the neighborhood but also the Foreign Secretary said that the foreign policy initiatives for the development of the North East extend further east.

“We have been collaborating with Japan for the economic development of the North East. We have set up the India-Japan Act East Forum, which I co-chair with Japan’s Ambassador to India, to take up projects for economic modernization of the North East,” he said.

Further, he said that the vision of making the North East a gateway to South Asia is not limited to expanding infrastructure and connectivity. It also encompasses a vision of creating common economic spaces and economic sub-regions that span boundaries and build on each other’s competitive advantages, he said.