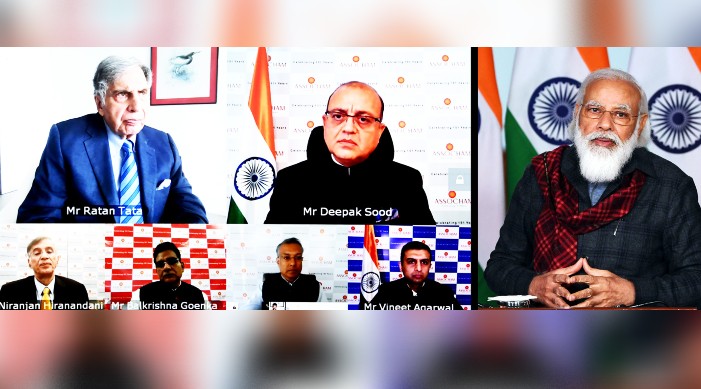 Prime Minister Narendra Modi on Saturday commended the business community for their contribution to nation-building. He said now the industry has complete freedom to touch the sky and urged them to take full advantage of it. “Put your full strength in the coming years for a self-reliant India,” the Prime Minister said.

Delivering a keynote address at ASSOCHAM Foundation Week 2020 via video conferencing, the Prime Minister said the country today is with entrepreneurs and wealth creators giving opportunities to crores of youth.

The government is continuing efforts to build an efficient and friendly ecosystem. He urged the industry to ensure that its benefits reach the last mile by bringing reforms within the industry like more inclusion of women and young talent, adopting the best practices of the world as soon as possible, corporate governance and profit sharing.

During the event, the Prime Minister also presented the ‘ASSOCHAM Enterprise of the Century Award’ to Ratan Tata, who received the award on behalf of the TATA Group.

Addressing the gathering through video conference, the Prime Minister said even during the pandemic, when the whole world is troubled for investment, record FDI and PFI have come to India as the world trusts the Indian economy now.

He gave a call for the industry to increase the domestic investment drastically in line with the increased confidence of the world.

However, he lamented the poor investment in Research & Development by Indian Industry, comparing with America where 70% of the investment on R&D is from the private sector. He asked the Indian industry to increase their investments in R&D especially in sectors like agriculture, defense, space, energy, construction, pharmaceutical and transport sector. He further said in every sector, all the companies should earmark a certain amount for R&D.

The Prime Minister remarked that the world is moving rapidly towards the fourth industrial revolution, challenges will come in the form of new technology and many solutions will also come. He said today is the time to plan and act.

He urged the business leaders to come together every year and connect every goal with one larger goal of Nation Building.

He said the coming 27 years, when free India will reach its century, will not only determine India's global role, but it will test both the dreams and dedication of Indians. He said this is the time to show the Capability, Commitment and Courage of Indian Industry to the world. He stressed that not only achieving self-reliance is important rather how soon we achieve this goal is equally important.

The Prime Minister remarked that there was never so much positivity in the world about India's success before. He owed this positivity to the unprecedented confidence of over 130 crore Indians. Now India is making new avenues to move forward, moving ahead with new energy. He said the reforms in the country have influenced in changing the sentiment of the industry from ‘Why India’ to 'Why not India' in investing.

The Prime Minister remarked that New India, by relying on its strength, relying on its own resources, is pushing forward for AtmaNirbhar Bharat and special focus is on manufacturing to achieve this goal. He said reforms are continuously being undertaken to promote manufacturing in India.

The Prime Minister said today, as we are moving forward on the mission mode to make local a global one, we have to react quickly to every geopolitical development.

He stressed on the need to have an effective mechanism for how India will meet any sudden demand in the global supply chain. He said the need of the hour is to achieve better synergy between industry organizations such ASSOCHAM with the Ministry of External Affairs, Commerce and Trade to achieve the goal.

He asked the industry for suggestions and ideas on how to react quickly to global transformations and how to have better mechanisms for faster response.

The Prime Minister said India is also capable of helping the world while meeting its needs. Even during the period of corona, India has taken the responsibility of pharmacy of the world and delivered essential medicines around the world.

Now even in the case of vaccines, India will fulfill its needs and also meet the expectations of many countries. He urged Members of Assocham to provide a global platform for showcasing the products of rural artisans. He said this would help in bridging the rural urban divide.

He stressed the need for the government of India to work together with state governments, farm organizations and industry associations for better promotion of our organic farm products, better infrastructure and better market. This would help our entire rural economy reach a new high.

The Prime Minister said in the beginning of the 21st century, former Prime Minister Atal Bihari Vajpayee aimed to connect India with the highways. Today, there is a special focus on Physical and Digital Infrastructure in the country. “We are engaged in providing broadband connectivity to every village in the country so that the reach of the village farmer is also up to digitally global markets,” Prime Minister Modi said.

He urged on using every avenue associated with funding to build better infrastructure ie. strengthening public sector banks, increasing the potential of bond markets, are efforts in that direction. Similarly, Sovereign Wealth Funds and Pension Funds are being tax exempted, REITs and INVITs are being promoted and Infrastructure related assets being monetized.

The Prime Minister said the government can provide the necessary facilities, create the right environment, give incentives and change policies. But it is the industry partners, who can convert this support into success. He said for the dream of a self-reliant India, the country has made up its mind for the necessary changes in the rules and regulations, the country is committed.